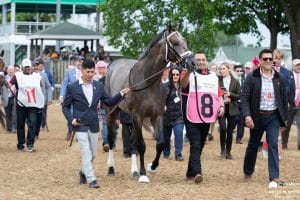 Charge It, who finished 17th in the Grade 1 Kentucky Derby last out, will cut back in distance in Saturday’s Grade 3, $250,000 Dwyer for sophomores going a one-turn mile at Belmont Park.

Owned by Amanda Pope’s Whisper Hill Farm, Charge It brings a 4-1-2-0 record and earnings of $230,400 while seeking to give Hall of Famer Todd Pletcher a third Dwyer triumph.

In the Kentucky Derby on May 7 at Churchill Downs, Charge It raced in the middle of the pack and in between horses approaching the first turn, finding himself in seventh down the backstretch. Coaxed by jockey Luis Saez around the far turn, Charge It came up empty in the stretch and was beaten 28 lengths.

Charge It was an impressive 8 1/2-length winner of his second out maiden score going the Dwyer distance in February at Gulfstream Park, where he registered a 93 Beyer Speed Figure. The son of Tapit replicated that figure when a hard-fought second to White Abarrio in the Grade 1 Florida Derby on April 2 at Gulfstream.

“I don’t think he got to show his true ability that day in the Kentucky Derby,” said Pletcher, who previously won the Dwyer with Any Given Saturday [2007] and Strong Hope [2003]. “He displaced a soft palate, which we did a minor surgical procedure on since then. I think we got that corrected, so hopefully he’ll come back to top form.”

Pletcher indicated that the Dwyer could set Charge It up for the nine-furlong Grade 2, $600,000 Jim Dandy on July 30 at Saratoga Race Course.

“We’re just looking for a place to get started, hopefully to set him up for some bigger stuff down the road,” Pletcher said. “If we’re running at Belmont in any race besides the Belmont Stakes, we have to go one turn, so I don’t think it’ll be a problem. He broke his maiden going a mile impressively.”

Hall of Famer John Velazquez, a three-time Dwyer winner, will pick up the mount from post 1.

Trainer John Terranova will saddle Fluid Situation, who will see added ground following a fourth-place finish in the six-furlong Gold Fever on May 15 at Belmont. The Curragh Stables-owned Warrior’s Reward bay received a troubled trip in the Gold Fever, getting checked several times down the backstretch. Fluid Situation made a menacing move approaching the top of the stretch, but was unable to catch pacesetting winner Senbei and finished fourth beaten five lengths.

Fluid Situation broke his maiden going seven furlongs on March 27 at Tampa Bay Downs, and Terranova said he is excited to stretch the colt out in distance.

“He got to a rough start in the Gold Fever. He had to check a couple of times. It got a little tight there,” Terranova said. “He’s the kind of horse that really doesn’t like to be hammered down like that. We were in the race at Monmouth the weekend before [the Long Branch on May 7] and we just decided to keep him at home rather than ship him back there when they brought the race back the following week. It didn’t set up the right way, and I think overall he wants a little bit more ground anyways. He hasn’t really had a chance to do that other than the time he broke his maiden going seven furlongs.”

“You don’t want to get in his way. He’s a horse that needs to be allowed to run a little bit,” Terranova said. “He’s just got real natural speed. Going a mile, obviously he’s a horse that should be prominent up front.”

Hall of Famer Javier Castellano will ride from post 3.

Following a close second on debut in April when going 6 1/2 furlongs at Keeneland, the bay son of Uncle Mo passed the distance test with a second-out score going 1 1/16 miles on May 15 at Belmont. The colt built on his advantage throughout, notching his maiden score by 3 1/4 lengths to garner a 91 Beyer.

A $775,000 purchase at the 2020 Keeneland September Yearling Sale, Nabokov is a full-brother to graded stakes winner and multiple Grade 1-placed Mopotism, both are out of the Bernardini mare Peppy Rafaela. Nabokov was bred in Kentucky by Frank Batten.

The Dwyer honors the well-known Dwyer Brothers, Mike and Phil, two Brooklyn businessmen who campaigned many notable horses under their Dwyer Brothers Stable moniker in the late 1800s. Either as collaborative or standalone owners, the Dwyers owned Hall of Fame thoroughbreds Hindoo, Ben Brush, Hanover, Miss Woodford and Luke Blackburn.