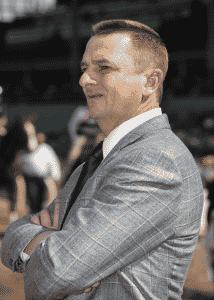 From the Breeders’ Cup:

Bo Hirsch’s homebred Ce Ce ($14.40) swept past a trio of dueling leaders, including defending champion Gamine, at the head of the stretch and drew off by 2 ½ lengths to win the 15th running of the $1 million Breeders’ Cup Filly & Mare Sprint (G1) for 3-year-olds and up, the first of nine Breeders’ Cup World Championships races Saturday afternoon at Del Mar.

Trained by Michael McCarthy and ridden by Victor Espinoza, Ce Ce covered the 7 furlongs on a fast main track in 1:21. It is the second Breeders’ Cup victory for McCarthy and the fourth for Espinoza.

Gamine, seeking to become the second repeat winner in the history of the race, took the lead out of the gate but was quickly pressured on the outside by Bella Sofia. On the far turn, Bella Sofia applied more pressure on the outside and Edgeway slipped through on the inside as Ce Ce began a sweeping four-wide move.

As the field straightened in the stretch, Ce Ce quickly burst clear to erase any doubt of the outcome. Edgeway was second, finishing three-quarters of a length in front of Gamine.

Ce Ce is a 5-year-old Kentucky-bred daughter of Elusive Quality out of the Belong to Me mare Miss Houdini.

Winning trainer Michael McCarthy (CeCe) – “Around the turn she put in her run and she was very good. It’s a proud moment for (Bo Hirsch and I). I wish I would have shaved a little more this morning. Such a fantastic day and fantastic event. Just happy for everybody.  She’s been very consistent. I think last year I decided that this year we would go one turn with her. She’s been touting herself this week that she was going to run a big one. I’m just glad she did on a stage like today.”

Winning jockey Victor Espinoza (CeCe) – “It was the right race at the right time for this filly.  Mike McCarthy did an amazing job training her up to this race.  I had a lot of horse.  She bounced out of the gate, but I decided to sit back and she was nice and relaxed.  When I shook the reins at her at the 5/8s pole, I got a little excited.  I wanted to go inside, but that spot was taken.  But it worked out pretty fine.”

Jockey Joel Rosario (second with Edgeway) – “I was on the inside and I had the room to run, but I was probably just second best today.”

Trainer Bob Baffert (third with 2-5 favorite Gamine) – “She was out there and she just got tired at the end. The winner ran a great race. I really can’t make a lot of excuses. She just got tired. I blame myself with the preparation. She had some time off and I think a race in between probably would have helped her. I think I made a mistake there. Now, she’ll be ready. Going in, I was hoping I was OK here. The winner is a good filly. She looked great in the paddock. I knew she was the one to beat.”

Jockey John Velazquez (third with 2-5 favorite Gamine) – “When you go that fast early, it’s hard to keep up the whole way around when you are pressed all the time. At the quarter pole, I thought she was going to have it, but as soon as I moved my hands and she didn’t respond the way I thought, I knew I was in trouble.”

Trainer Rudy Rodriquez (fourth with Bella Sofia) – “We tried to go with Gamine and we set up the race for the third-best horse. I thought we were running good. We got bumped a little bit in the stretch, but I think we were done already at the time. This is what you expect in these big races. They went pretty fast and came home fast and that’s what it is.”