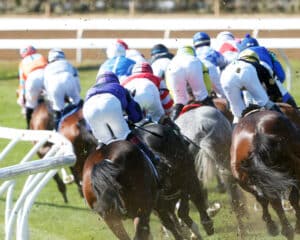 Godolphin’s homebred Space Blues (IRE) ($6.20) collared longtime leader Smooth Like Strait at mid-stretch and went on to post a half-length victory in the 38th running of the $2 million FanDuel Breeders’ Cup Mile (G1) presented by PDJF for 3-year-olds and up Saturday afternoon at Del Mar.

Trained by Charlie Appleby and ridden by William Buick, Space Blues covered the mile on a firm Jimmy Durante Turf Course in 1:34.01. It is the second victory of these Championships for Appleby and Buick who teamed up to win Friday’s Juvenile Turf (G1) with Modern Games (IRE). It is the fifth Breeders’ Cup victory for Appleby and fourth for Buick and the first for both in the Mile.

Winning trainer Charlie Appleby (Space Blues) – “I’m absolutely delighted. He’s been a fantastic horse and will now be retired to stud. William gave him a great ride in the perfect position throughout. Space Blues has been a great servant and it’s another well-deserved win. I’m thrilled for team Godolphin both here and back home at Moulton Paddocks in Newmarket and obviously His Highness Sheikh Mohammed. It was an interesting race beforehand with Master of The Seas being scratched but we’re getting used to that now! Rules are rules and we have to abide by them.”

Winning jockey William Buick (Space Blues) – “Coming here I knew I had some very good rides. Space Blues traveled to America very well and Charlie has been delighted with all of our horses coming into the races. We know how tough it is to come here and everything needs to pan out for you to win.  He’s a great little horse and I don’t think he’s had the recognition he deserves.  A mile round here suits him down to the ground. I was a bit nervous going into the race as I wanted to give the horse what he deserved.”

Trainer Michael McCarthy (Smooth Like Strait, second) – “I thought it worked out wonderfully. He found himself in a great spot turning up the backside, 23 (seconds) and change. Slowed it down a little bit the second quarter. The horse came with a run; always does. As far as American turf horses, no one has put together a campaign of his consistency.”

Trainer Paulo Lobo (Ivar, third) – “Everything went well and he overcame a very bad post. He ran good. A little bit more pace I think would have helped us.”

On In Love, seventh: “He didn’t run as we expected, but it’s a tough race. We’ll regroup now and prepare for next year.”

Jockey Joe Talamo (Ivar, third) – “He had a strong finish. It’s very tough to come back from behind.”

Trainer Mark Casse (Got Story, fifth in final career start) – “I was concerned because the turf has a little more give to it than she likes. I knew she’d struggle some, but I’m proud of her. She ran hard again. What can you say? She’s done things others never have.”