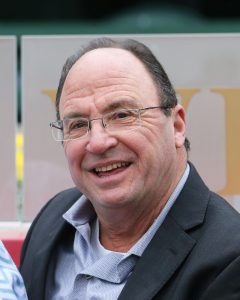 Eclipse Thoroughbred Partners’ Aloha West ($24.60), sixth at the head of the stretch, rallied on the far outside to edge Dr. Schivel by a nose at the finish line to win the 38th running of the $2 million Qatar Racing Breeders’ Cup Sprint (G1) for 3-year-olds and up, Saturday afternoon at Del Mar.

Trained by Wayne Catalano and ridden by Jose Ortiz, Aloha West covered the 6 furlongs on a fast main track in 1:08.49. It is the fourth Breeders’ Cup victory for Catalano and fifth for Ortiz and the first in the Sprint for Catalano and Ortiz, who won his second race of this year’s World Championships.

Heavily favored Jackie’s Warrior found himself in an early duel for the lead with Special Reserve and Matera Sky as Dr. Schivel raced in the clear in fourth and Aloha West was last early.

Turning into the stretch, Dr. Schivel swept past Jackie’s Warrior and Special Reserve and opened a daylight margin, appearing well on his way to victory until the final jump.

Winning trainer Wayne Catalano (Aloha West) – “I liked everything. I liked where we were at early in the race and the head-bob was a tough one. But you know when the results come this way we’re happy. Right now, it’s a good time to win a race like this. We are low on horses and have been around a long, long time. I have been reinventing myself so many times. Fifty years and counting. I just want to settle down and have a handful of nice ones in one spot and enjoy my life with my three grandkids and one more on the way.”

Winning jockey Jose Ortiz (Aloha West) – “I knew there was a lot of speed in the race and I had none, so I knew I was going to come from the back. He was giving me a great run, but I didn’t know if I was going to get there. Finally, we did. He put his head right on the wire.  I was about 60 percent sure I won.”

Jockey Flavien Prat (Dr. Schivel, second) – “That was a tough loss. He was running really strong and didn’t see the winner coming as I did not look up.”

Trainer Todd Pletcher (Following Sea, third) – “He ran great. He had a good run up the rail and the door closed on him. He had to alter course and re-rally. Looked like he could have been right there if he could have snuck through.”

Jockey Joel Rosario (beaten favorite Jackie’s Warrior, sixth) – “He broke really well and was running easy early on. Sometimes it is just hard to win all the time.  He gave his best and we were just outrun. On the far turn, two horses came to me a little bit, I could see they were moving better than we were. He always fights but, as I said, you can’t win all the time.”