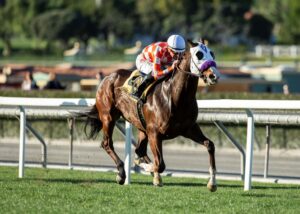 KENT DESORMEAUX, BARRAZA, WINNER: “I spent more time trying to slow him down. He was aggressive today, but he always is. The tensest moment was crossing the dirt track, he fell terribly behind, but he collected himself in forty yards and just drug me along the racetrack. I was just a lucky passenger.

“The writing is on the wall, he’s always been awesome to work on the dirt, but his efforts on the grass are just phenomenal. He loves the hill, but we were off the hill because of mother nature. He’s just naturally fast, my job was just to coax his speed, that’s what I spend time doing. He’s just good.

“His last effort was an eyeopener because he had no right winning that race, but Vladimir’s got him breathing fire and I’m just the happy passenger.”

VLADIMIR CERIN, BARRAZA, WINNER: “I told Kent, ‘You know what I like best about you?  I never have to give you instructions.’  Would anyone have instructed him to go to the front with this horse off his last race?  Hell no, so just let him do what he does best.  This horse is like a 14-year-old boy playing high school football and he scores a touchdown and he can’t wait to do it again.  That’s how this horse is.  We don’t work him in company anymore, because he wants to beat everybody in the gallops, the workouts, everything.  I like him…I still think he can go long.  No need to find out yet, right?”

NOTES: The winning owners are Holly and David Wilson.