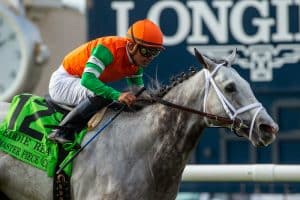 The veteran gray Chilean-bred Master Piece found a hole at the three-eighths pole and rolled on home from there to capture the 49th running of the Eddie Read Stakes Sunday at Del Mar.

The 6-year-old earned a first prize of $150,000 from the total purse of $252,500 in the Grade II headliner finishing up three and a quarter lengths to the good under rider Abel Cedillo. Trainer Mike McCarthy saddled the ridgling who is by the Irish stallion Mastercraftsman.

Finishing second in the nine furlongs on turf was Anastasi, Ukegawa and Valazza’s Hong Kong Harry, who had a half length on CYBT, Sterling Stables and Nentwig’s Cathkin Peak. Final time for the race was 1:46.25.

There was a brief incident at the start of the race coming out of the infield chute where several horses came together, causing trainer Phil D’Amato to claim foul on the winner. The stewards looked at the video for several minutes, but in the end let the results stand.

Master Piece has now won six of 18 starts and earned a total of $354,412. He was a stakes winner in his native Chile, but this is his first stakes victory in the United States.

The track’s Pick Six Single Ticket Jackpot wager once again could not be hit meaning there will again be another carryover, this time amounting to $495,729. Racing will resume at the shore oval on Thursday with first post at 2 p.m.

ABEL CEDILLO (Master Piece, winner) – “I didn’t think a whole lot happened at the start. (There was a claim of foul for actions after the break.) I just brushed the horse alongside me. My trip was really good; he was running all the way. At the three-eighth pole I got lucky. I had to go between two horses and it was there for me. Then he was really running late. Big race; good race for him.”

MICHAEL MCCARTHY (Master Piece, winner) — “He’s very good fresh; he’s a happy horse down here. I was surprised at the move he put in; I knew he’d run well. That was pretty impressive. I was a little concerned but it was one horse (he was involved in the inquiry with) and it’s not like he rocked half the field.”

The stakes win was the first of the meet for rider Cedillo and his first in the Eddie Read. He now has 12 stakes wins at Del Mar.

The stakes win was the first of the meet for trainer McCarthy and his first in the Eddie Read. He now has five stakes wins at Del Mar.

The chief partner in the ownership group is the Don Alberto Stable of Lexington, KY. They are also the breeder. The others in the group are Fernando Diaz-Valdez of Moraga, CA and Roberto Abumohor of Santiago, Chile as the head of the Baalbek Corporation.