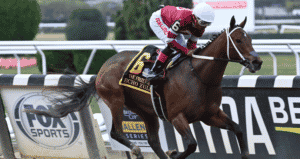 Talented juvenile filly Echo Zulu stretched out to a one-turn mile and kept a spotless record intact with a 7 ¼-length romp in Sunday’s 72nd running of the Grade 1, $400,000 Frizette at Belmont Park.

Following a 5 ½-length triumph on debut going 5 ½ furlongs, she commanded through every point of call in the Grade 1 Spinaway on September 5, winning by four lengths. In capturing the Frizette, she earned an automatic entry into the Grade 1, $2 million Breeders’ Cup Juvenile Fillies on November 5 at Del Mar.

Echo Zulu added to what has been a sensational first crop of racing age for freshman sire and 2017 Horse of the Year Gun Runner, who also was conditioned by Asmussen.

“It’s amazing. She’s a special filly and she’s by Gun Runner,” said Asmussen. “How much better can it get? She’s better than good.”

Breaking from post 6, Echo Zulu wasted no time powering to the front under Ricardo Santana, Jr. and appeared comfortable on the front end with her ears pricked through a swift opening quarter-mile in 22.38 seconds. Gerrymander, piloted by jockey Joel Rosario, was one length to her outside under a strong hold in second with longshot Magic Circle another path wide in third.

Through a half-mile in 45.98 seconds, Gerrymander inched her way to even terms with Echo Zulu, but Santana, Jr. started getting busy aboard his charge just outside the quarter pole, and it didn’t take long for her to break free from her rivals.

At the three-sixteenths pole, Santana, Jr. took a peek behind him and saw no imposing threats. Wrapped up in the final half-furlong, Echo Zulu stopped the clock in 1:35.12 over the fast main track.

“She’s special. She broke her maiden and we never expected she was ready first time out in Saratoga,” Santana, Jr said. “How she did it [shows] she has some ability and she proved it today. She broke good and was waiting for the company. When the company got to her, she took off again. She’s really special.”

Despite the torrid fractions down the backstretch, Santana, Jr. said he felt his filly doing it with ease.

“It felt like I was walking, how she was doing it. She was really impressive for a two-year old,” Santana, Jr. said. “I had a lot of horse. I never needed to ask her that’s how much horse I had.”

“The first thing Ricardo said when he came back was that he couldn’t believe how relaxed she was,” added Asmussen. “He said her ears were up and she was relaxed and within herself.”

Echo Zulu became the first filly to capture the Spinaway-Frizette double since Michael Tabor’s Adieu in 2005.

“She’s a Spinaway and a Frizette winner. That’s elite company,” Asmussen said. “I’m proud of her. Good energy though the wire. She didn’t stagger in there and she set honest fractions.”

Asmussen said he feels Echo Zulu has what it takes to handle the upcoming two-turn test at Del Mar.

“The filly obviously has a tremendous amount of ability and I think the big jump is to get to this level,” said Asmussen. “The Spinaway and the Frizette – that sort of foundation and doing it multiple times gives you a tremendous amount of confidence. My worry was the Spinaway off one 5 ½-furlong race with the [lack of] seasoning. The Spinaway and Frizette have eased all those tensions, now it’s just up to how fast everybody is.”

Echo Zulu was acquired by her owners for $300,000 from the 2020 Keeneland September Yearling Sale, where she was consigned by co-breeder Betz Thoroughbreds. Out of graded stakes winner Letgomyecho, she is a half-sister to Grade 1-winner Echo Town and graded stakes winner J Boys Echo.

Gerrymander maintained second position throughout, finishing three lengths to the better of maiden A Mo Reay.

“I was sitting in a good spot, but she was just second best,” said Rosario.