Notes & Quotes From the G1 Hollywood Derby: Beyond Brilliant

Notes & Quotes From the G1 Hollywood Derby: Beyond Brilliant 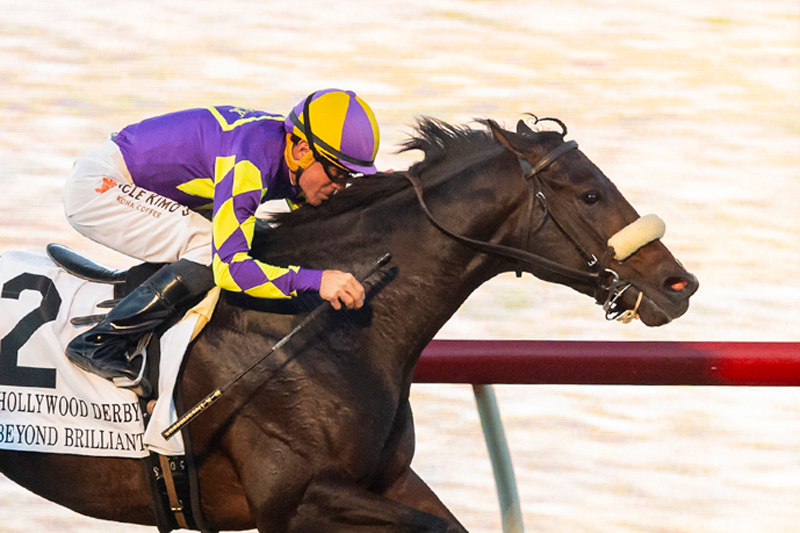 Given a masterful ride by Hall of Famer Kent Desormeaux over nine furlongs on the Del Mar grass course, C R K Stable’s Beyond Brilliant was a picture perfect winner by a neck in Saturday’s Grade I, $404,500 Hollywood Derby.

The bay son of Twirling Candy made every pole a winner as Desormeaux milked every ounce of run from his charge through the first mile, then got him to sprint hard through the stretch and hold off Godolphin’s Santin in 1:48.84. Sterling Stables, Nentwig or CYBT’s Cathkin Peak finished a length and a quarter back in third in the field of 14 3-year-olds.

Beyond Brilliant, a 2-year-old-in-training purchase for $200,000 last year, earned a first prize of $240,000 for his efforts and increased his bankroll to $381,280 with his third victory in his ninth start. He races out of the barn of trainer John Shirreffs and was scoring his first stakes tally in taking the Grade I headliner.

The Hollywood Derby was one of three graded stakes on the Saturday program. Earlier in the day, Three Diamonds Farm’s Field Pass captured the Grade II, $251,000 Seabiscuit Handicap and Slam Dunk Racing and Roger Newman’s Tezzaray was home first in the Grade III, $103,000 Jimmy Durante Stakes.

KENT DESORMEAUX (Beyond Brilliant, winner) – “All credit for this win goes to the barn. They’ve done wonders with this horse over the past month. When I rode him last time (October 31 at Santa Anita), he was a handful to control. Today he was easy. He was dry as a bone in the paddock and he was happy out on the racetrack. His mind was right. And he showed he can sprint that last part.

JOHN SHIRREFFS, (Beyond Brilliant, winner) – “This horse likes to be on the lead or close to the lead and obviously with a big field that’s a good place to be. And Kent Desormeaux is riding great right now, isn’t he? I’m gonna put Kent on more horses he’s riding so well. I’m thankful for him doing it for us today.”

The stakes win was the third of the meet for rider Desormeaux but his first in the Hollywood Derby. He now has 87 stakes wins at Del Mar, ninth most of all riders.

The stakes win was the first of the meet for trainer Shirreffs and his first in the Hollywood Derby. He now has 20 stakes wins at Del Mar.

The winning owners are the C R K Stable of Lee and Susan Searing of Arcadia, CA.