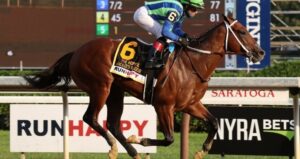 Stakes action at Saratoga Race Course concluded with an astonishing performance from J. Kirk and Judy Robison’s Jackie’s Warrior, who broke like a rocket and maintained the lead throughout to keep an unbeaten record intact with a 2 ¼-length win in the 116th running of the Grade 1, $250,000 Runhappy Hopeful for 2-year-olds going seven furlongs.

As the only stakes winner in the field, Jackie’s Warrior made his last start in similar runaway fashion when taking the six-furlong Grade 2 Saratoga Special on August 7.

Piloted by Joel Rosario, Jackie’s Warrior was quickest away from the gate and established a two-length lead through opening splits of 22.56 and 44.83 seconds over the fast main track.

“He’s a very athletic colt that gets over the ground extremely well,” said Asmussen’s chief assistant Scott Blasi. “Steve picked him out for Mr. Robison, and it’s been a good partnership over the years. We’re extremely happy to have him.”

Blasi said Jackie’s Warrior could target another Grade 1 on the NYRA circuit and point towards the Grade 1, $250,000 Champagne, a one-turn mile on October 10 at Belmont Park.

“He just continues to improve. He gets stronger in his works,” Blasi said. “He does things effortlessly. I’d expect he’d go on to the Champagne and the Breeders’ Cup from there. But, one race at a time. We don’t want to get too far ahead of ourselves.”

Jackie’s Warrior was a maiden winner at first asking in June at Churchill Downs when piloted by Ricardo Santana, Jr. in a five-furlong maiden special weight sprint.

Rosario, who led all riders with 13 stakes wins at the meet, was aboard for the last-out Saratoga Special score and said he continues to be impressed by the swift colt.

“He broke really fast and I was two lengths in front right away,” Rosario said. “He’s a fast horse. He was able to carry his speed the whole way around. I tried to get off the rail a little bit and it felt like he was comfortable with that.

“It’s unbelievable the way he ran he ran last time and he was probably better today,” added Rosario. “He’s a big horse and it looks like he can go longer, too.”

Returning $5.70 for a $2 win wager, Jackie’s Warrior doubled his lifetime earnings to $265,064 in an unbeaten record of three starts.

Bred in Kentucky by J & J Stables, the Maclean’s Music bay is out of the A.P. Five Hundred mare Unicorn Girl and was purchased for $95,000 from the 2019 Keeneland September yearling Sale, where he was consigned by Taylor Made Sales Agency.

Live racing will now move to Belmont Park for the 27-day fall meet, featuring 38 stakes worth $5.58 million in purse money, that will kick off on Friday, September 18 and run through Sunday, November 1.