(Blue Prize gets up at the wire to repeat as the winner of the G1 Juddmonte Spinster Stakes at Keeneland on Sunday / Photos by Holly M. Smith)

“She means a lot to me. The horses of my country (he is also a native of Argentina) have made me look good. Thanks to the trainers that trained them before me – they did a great job developing them. To tell you that I thought I was going to beat Elate, I would be lying. I thought she (Blue Prize) was sitting on a great race. She was coming into form. When we went to Saratoga, we were looking to put her in winning mode. We accomplished that (with a victory in the Aug. 18 Summer Colony Stakes). I thought if (jockey Joe Bravo) could relax her and if she had a target, she’s going to run big. Elate is a great, great mare.”

On racing in the Breeders’ Cup Distaff (G1)

“Ignacio had her very keen today. He said, ‘Try to keep her quiet. She’s ready to go.’ After she broke in front, she got back underneath me. There were some really good horses in there, but she was able to (have) a stalking trip and watch them (in front). We’ve always said she runs great at a target. She listens to me. I really didn’t have to do too much. It’s fun to be part of a good horse.”

“These mares are very nice. I mean, the winner won the Spinster last year. I’ve ridden her before. If they run fast, she runs fast. If they run slow, she runs a little slower. But she always finds a way to get to the wire first. About this race, I think I was in a good position the whole way. (Elate) was very comfortable, and we were in a good rhythm. She just got beat.”

“She didn’t show much speed out of the gate and the (Steve) Asmussen horse (She’s a Julie) they sent to the lead and Elate was to my outside. I just kept tracking and saving a little ground and tried to go through.”

“She didn’t have the easiest post and trip on the inside, but she showed a lot of heart and made the best bid she could. The good news is she’s 3 and if all goes well, we’ll have her back next year. (The Breeders’ Cup) would be a decision that Chad and (owner) Peter (Brant) will figure out.”

“We had a good trip. My filly got a little tired at the end. For a Grade 1, we walked (fractions were slow).”

“I had a dream trip going around there. I followed She’s a Julie, who went a nice, honest gallop the whole way around. My filly probably just got a bit intimidated by Dunbar Road joining a little bit early. There was no room going by Jose (Ortiz on Elate), who obviously was ready to put the race to bed. My filly just wasn’t quite ready to go on at that stage. My filly does have her own running style, and she almost has to have her own space in a race. But she’ll come back again and bounce back better.” 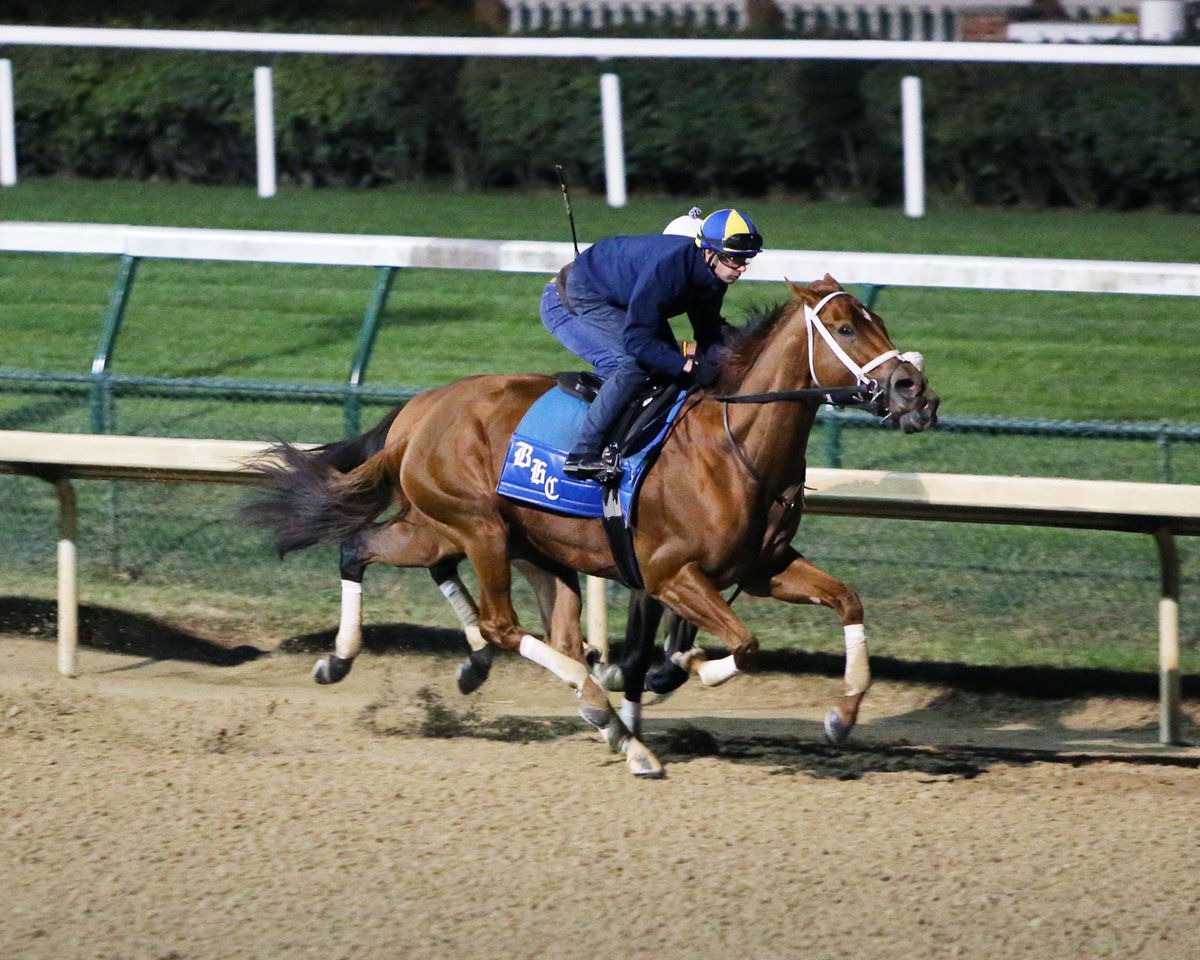 Churchill Downs PR @DerbyMedia
Saturday’s work tab @ChurchillDowns was filled with star power with many of the nation’s top contenders, including champion Monomoy Girl, logging their penultimate workouts before the Nov. 6-7 @BreedersCup at Keeneland. A rundown of the activity: https://t.co/anxHQBYPe1 https://t.co/rpATKiRlKM
0
3
The Pressbox @thepressboxlts

Keeneland’s Announcer Tests Positive; To Be Replaced by Stone https://t.co/x3zGbn56A5
View on Twitter
0
1

The Pressbox
(Swiss Skydiver at Churchill Downs / Photos by Coady Photography) Editor's Note: On Saturday morn, a couple of hopefuls for the upcoming Breeders' Cup worked over the main track at Keeneland. And, on the same Saturday morn and just a few miles away, a few more aspiring stars put in their works at famed Churchill Downs. At Keeneland? There was the mare Bellafina, who worked under the tack of Calumet Farm. [ 59 more words ]

Breeders' Cup Hopefuls Work at Keeneland & Churchill Downs: Through the Eyes & Lens of Coady Photography
(Swiss Skydiver at Churchill Downs / Photos by Coady Photography) Editor's Note: On Saturday morn, a couple of hopefuls for the upcoming Breeders' Cup worked over the main track at Keeneland. And, on the same Saturday morn and just a few miles away, a few more aspiring stars
thepressboxlts.com
1    View on Facebook

The Pressbox
(Travis Stone will handle the microphone at Keeneland today / Photo by Holly M. Smith) From the Keeneland Media Team: In adherence to Keeneland’s Healthy at Work protocols, track announcer Kurt Becker will miss closing day of the Fall Meet as he has tested positive for COVID-19. Kurt is experiencing only mild symptoms and he is resting at home. We look forward to his speedy recovery and to welcoming him back for the Breeders’ Cup World Championships at Keeneland on Nov. 6-7. Travis Stone from Churchill Downs will be the visiting track announcer today.

Keeneland's Announcer Tests Positive; To Be Replaced by Stone
(Travis Stone will handle the microphone at Keeneland today / Photo by Holly M. Smith) From the Keeneland Media Team: In adherence to Keeneland’s Healthy at Work protocols, track announcer Kurt Becker will miss closing day of the Fall Meet as he has tested positive for COVID-19. Kurt is experienci...
thepressboxlts.com
1    View on Facebook