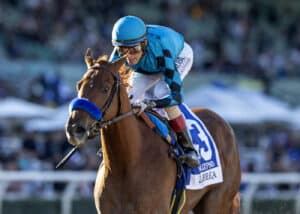 JOHN VELAZQUEZ, KALYPSO, WINNER: “Bob and I talked about it. We thought there was a lot of speed in the race and we knew she had speed but I didn’t want to be in a duel and not have anything to finish with. I told Bob that if she has more speed, then I’m just going to let her go let her be in the lead. I wanted to give her a chance the first part of the race and everything was really easy until I got to the three-eighths pole. I kind of got on her a little bit and she bit into the bridle, so I said, ‘alright we’re going good’. At the quarter pole I pulled her to the clear and from then on it was pretty easy.”

JOSE ORTIZ, BRILLIANT CUT, SECOND: “She ran a very good race. She broke well and clean and put me into a good position. I was sitting in second the whole time. When we went past the quarter pole, I went after her.  I was just trying to break clean. If she was going to give me the lead I was going to take it, but she was chasing hard early on so we sat in second. She ran well, we were second best.”

BOB BAFFERT, KALYPSO, WINNER: “We turned her out after that Churchill Downs race (ran 12th).  We brought her back and she was fresh.  That is what happens when you have two good fillies in the same race.  The other didn’t run good (Private Mission).   She was not running at all.  That’s not her.   Johnny V. got her (Kalypso) to relax.  She has a tendency to go to fast.  She was really relaxed today and she was one happy filly.  Grade I’s are hard to come by.

“Johnny V. after the first race, I told him that is the first time I have won the first race at this meet.  You know Johnny V. is great to begin with.  He’s like Tom Brady.  He’s a lot wiser.  He doesn’t panic.  He rides his horse.  That’s why he is a great one.”