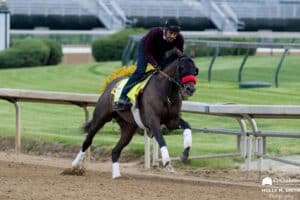 “Charlie is a rock star,” winning trainer Doug O’Neill said. “I’m just a roadie but I am a pumped roadie, that’s for sure.”

“I could tell Charlie did not corner as well as he could. But it didn’t seem like he affected (Midnight) Bourbon at all, thank God,” O’Neill said. “He seemed like he was clear. Flavien had mentioned maybe putting a set of cheaters on him again. He said he got a little distracted being on the led, kind of looking around and that might have caused him not to corner as well as he could have.”

“This one did not seem as dramatic as the (Haskell),” O’Neill said. “For this to come on top of his last race, this was definitely exaggerated and had a long inquiry as well. Thank God he was clear and didn’t cause any interference. I was pretty confident they were not going to take him down.”

“It’s so big,” O’Neill said of Hot Rod Charlie’s first Grade 1 win. “It still hasn’t sunk in. He has had so many hard fought races and to not have a Grade 1 on his resume seemed so unfortunate for a horse as good as he is. It’s good to finally get it.”

O’Neill believes Hot Rod Charlie could be a “big force” in the Classic.

“Obviously, there are some big-time horses out there that have more experience than him, but he’s coming around at a good time,” O’Neill said. “These 3-year-olds this time of year seem to have had a lot of success jumping up against the older competition. Hopefully, that holds true here.”

“Dropping him once this year ain’t enough? That’s exactly what I got to say,” Asmussen said before the race was made official. “Anybody who’s ever watched a horse race knows that it [cost us momentum]. Where the [heck] is he going?”

“I was under control the whole race.”