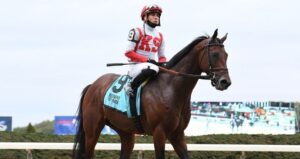 Public Sector entered the Hill Prince off a pair of Saratoga stakes scores, capturing the Grade 2 National Museum of Racing Hall of Fame on August 6 followed by the Grade 3 Saranac four weeks later.
Jockey Quotes:
Irad Ortiz, Jr. — Public Sector (1st):
“He has a great mind, this horse,” Ortiz, Jr. said. “He switched off when I wanted him to and when I asked him to respond, he gave me a great turn of foot.”
Trainer Quotes:
Chad Brown — Public Sector (1st):
Brown was full of praise for Ortiz, Jr. as the two joined forces for their second stakes victory together this meet.
“The ride was really great by Irad. I know he’s a very talented horse, but he delivered a really top ride,” said Brown, who saddled his third Hill Prince winner. “For him to get him out and get good position and be clear and out of trouble was a great move. He was saving ground and ahead of a lot of the other runners in the race and he timed it just perfect. Up until the last moment he was focused on passing the pacemaker, but was still taking peeks throughout the stretch to his right to make sure no one was coming.
“The bottom line is I think Irad had complete control of the whole field throughout the race,” Brown continued. “It was a magnificent ride and a real professional performance by both the horse and him.”
“That was really the plan – win or lose,” Brown said. “As long as he ran well, we really thought he could follow the path Domestic Spending ended up getting out to the Hollywood Derby last year for his last start of the year.”
Completing the order of finish were Hilliard, Soldier Rising, War Bomber, Sifting Sands, Slicked Back, He’spuregold, Founder and Original.
Live racing returns Sunday at Belmont Park with a 10-race card, featuring the $100,000 Point of Entry for 3-year-olds and upward going 12 furlongs over the Widener turf [Race 9, 4:52 p.m.]. First post is 12:35 p.m. Eastern.
2021-10-24T10:48:14-04:00By The Pressbox Staff|