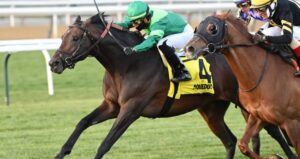 Peter Brant’s Serve the King, under a perfect ride by meet-leading rider Irad Ortiz, Jr., collared Channel Cat in the final jumps to capture Saturday’s Grade 2, $200,000 Red Smith, an 11-furlong inner turf test for 3-year-olds and up at Aqueduct Racetrack.

Ortiz, Jr., who leads the Big A fall meet with 13 wins, said he felt confident throughout.

“I had a really good trip. He broke sharp and was forwardly-placed,” Ortiz, Jr. said. “He put me in a good position, so I saved all the ground for the whole race. At the half-mile, I started moving and he responded really well. I was able to tip him out and when he hit the clear, he was running.”

The victory marked a third Red Smith score for Brown following wins by Expansion [2009] and Mr Maybe [2015], who was also piloted by Ortiz, Jr.

Velazquez was full of praise for the Jack Sisterson-trained Channel Cat, who rebounded impressively from a sixth-place finish in the Turf Cup in September at Kentucky Downs.

“He’s a game horse. It’s nice to get these horses that run their eyeballs out. We just got beat by the wire, but that’s part of racing,” Velazquez said. “They came to me at the quarter-pole and I had to use him a little sooner than I wanted to. I just got caught right at the end.”

Brown said he was pleased with the effort from Serve the King, who had earned a career-best 100 Beyer Speed Figure in his Joe Hirsch effort.

“His numbers are pretty good, especially for a distance horse. He keeps getting faster and he’s a progressive horse,” Brown said. “He had every right to not get there today given the way the race unfolded and he showed a lot of determination to get up in time.”

Serve the King, who was purchased from Book 1 at the 2017 Tattersalls October Yearling Sale, launched his current campaign with fourth-place efforts at Monmouth Park in the Grade 3 Monmouth in June and the Grade 1 United Nations in July. He entered the Joe Hirsch from a first career stakes win in the restricted Johns Call, traveling 1 5/8-miles over firm going in August at Saratoga Race Course.

Brown credited his team for the development of the lightly-raced 5-year-old.

“A lot of credit goes to my Monmouth crew, who really did a good job helping this horse,” Brown said. “As a younger horse, he was a little bit quirky and wouldn’t want to train all the time and for whatever reason down there he has a comfortable situation and would train on. That’s why he spent a lot of his time down there.

“After the Hirsch, we left him here [at Belmont Park] and he picked right up and has been cooperative and he’s fine now,” added Brown, who leads all trainers at the Big A fall meet with eight wins. “My crew here did a great job. It was a real team effort from different divisions to keep this guy on track.”