Notes & Quotes From the G2 Santa Ynez Stakes: Under the Stars

Notes & Quotes From the G2 Santa Ynez Stakes: Under the Stars 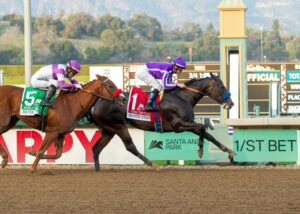 FLAVIEN PRAT, UNDER THE STARS, WINNER: “She really dug in, it was nice to see her do that. She broke well, I didn’t know really what to expect as far as speed before the race, but since she broke well, I used that to my advantage. She took the heat and dug in down the lane, so it was a good run. The (distance) was perfect for her.”

BOB BAFFERT, UNDER THE STARS, WINNER: “She improving, she’s been working heads-up with that filly that won yesterday (Adare Manor, 12 length maiden winner).  When we came into this race, I was worried about the post, but she’s improving. She’s a half sister to Bodemeister, so she has the pedigree to  go further and Flavien thinks she wants to go further also.  It’s nice when they’re bred that well and the Coolmore gang, the ownership group, they’ve been real patient.  I’m just glad they sent her to us.”