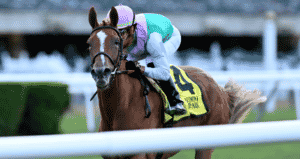 The victory provided four-time Eclipse Award-winning trainer Chad Brown with his 100th graded stakes win at Belmont Park, according to records provided by Equibase.
Trainer Quotes:
Chad Brown — Pocket Square (1st):
“What an achievement for my team, my owners, and my horses throughout the years that have run so hard,” Brown said. “A big thank you to NYRA for providing me and my horses such great facilities to train and race on through the years. They have been instrumental in developing my business.”
Brown said he may have moved Pocket Square into Grade 1 company too quickly.
“She had that explosive run at Keeneland and I’ve done that before, where I run them in a race like the Just a Game off an effort like that and won,” Brown said. “When it works out well, you feel like a hero. When it doesn’t work out, you have to go back to the drawing board, which I had to do. I probably should have brought her along just a little bit slower after that Keeneland race and not throw her in the deep end of the pool, but that’s past us now and we have her back on track with a couple of really nice wins.”
Jockey Quotes:
Irad Ortiz, Jr. — Pocket Square (1st):
“She did everything right,” Ortiz, Jr. said of Pocket Square. “She broke and relaxed. She waited on me to call on her to run and when I asked her, she took off. She looked like much the best.
“I only used the stick a couple of times and that was it,” he added. “She was moving comfortably so I didn’t need to do much.”
Manny Franco — Miss Teheran (2nd):
“She was moving well and I had a good trip,” said Franco of Miss Teheran, who was pulled up in the gallop out and provided a precautionary ride home in the equine ambulance. “She bled [past the wire], which is the only excuse I can give. She ran a good race.”
2021-09-26T10:06:08-04:00By The Pressbox Staff|