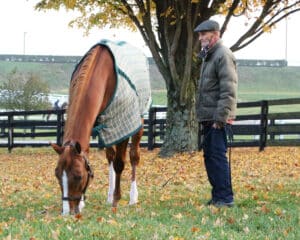 Joseph Allen’s homebred Doswell, solidly second last year despite a bothersome trip, had no such trouble in his return to the $200,000 Fort Lauderdale (G2) Saturday at Gulfstream Park, rolling to a front-running 1 ½-length victory and stamping himself a contender for next month’s $1 million Pegasus World Cup Turf Invitational (G1).

With Junior Alvarado aboard for trainer Barclay Tagg, Doswell ($11) completed the distance in 1:47.99 over a firm turf course to earn his first win since an October 2020 allowance at Belmont Park, also in gate-to-wire fashion. It was his first stakes win, having run second by two lengths in last year’s Fort Lauderdale and third by 1 ¼ in the W.L. McKnight (G3) during the Championship Meet.

Doswell, a gelded 5-year-old son of Giant’s Causeway, went to the sidelines following the McKnight and didn’t return to racing for nine months, running third in back-to-back optional claiming allowances Oct. 21 at Belmont and Nov. 19 at Aqueduct, his prior start.

“He’s hard to get fit because he’s had some little problems and stuff like that, and we had to give and take with him a lot,” Tagg said. “But, I felt kind of good about him today because he was fit. We were able to train him hard.

“He’s a horse that’s kind of made for trouble,” he added. “[Assistant trainer] Robin [Smullen] has just done a hell of a job with him. She rides him every single day,” Tagg said. “She got him all straightened out and he’s very sensible now.”

Doswell broke sharply from his rail post in a field of 12 and was sent to the lead by Alvarado, going a quarter-mile in 24.73 seconds and a half in 48.69 with only mild pressure from Analyze It, a three-time Grade 3 winner that was Grade 1 placed twice in the summer of 2018.

Alvarado and Doswell were still in control after a six furlongs in 1:12.35, when 17-1 long shot Atone rolled up into contention on the outside. Doswell straightened for home and was set down for a drive to the wire with Atone in pursuit and Grade 3 winner English Bee making a late charge.

“It was nice and easy. Last year they kind of told me to try to see if he would stalk to make sure he would finish strong, and we kind of took away his main [weapon]. Today they told me, ‘You’re in the one [post], just leave out of there rolling,’ and that’s what I did,” Alvarado said.

“He broke good, I put him on the engine a little bit and then tried to slow him down, and he rated kindly for me. When we turned for home, I asked him and he gave me a nice kick,” he added. “I knew they were in trouble as soon as I started asking him because he picked it up very quickly and I thought they’d have to be flying at the end to go by.”

Tagg, who won the Holy Bull (G3) and Florida Derby (G1) at Gulfstream with Tiz the Law en route to victories in the Belmont (G1) and Travers (G1) in 2020, praised Alvarado for his heady ride.

“Junior rode him super,” he said. “He doesn’t like being in a crowd, I don’t think, and he doesn’t like all that pressure around. He had the inside and we thought if he gets away good, just leave him there.”

Atone held second, a half-length ahead of English Bee. It was 1 ¾ lengths back to Space Traveller in fourth, followed by L’Imperator, Sole Volante, Renaisance Frolic, Breaking the Rules, Order and Law, Media Blitz, Analyze It and King Guillermo.

Since the Pegasus Turf debuted in 2019, four of its runners have come from the Fort Lauderdale including winners Largent, second by a neck to stablemate Colonel Liam in January, and Instilled Regard, third to Maker-trained Zulu Alpha in 2020. In defense of his title, Maker ran third with 14-1 long shot Cross Border in 2021, beaten two necks.

“We’re thinking about it. We’ll probably go in it,” Tagg said. “We’ll see how he comes out of this and see if he freshens up. If he’s got energy and all that kind of stuff, I don’t want to take him over there and just make a fool out of him if we can help it.”