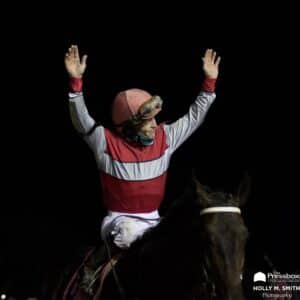 (Rider James Graham after winning the G3 Lecomte Stakes at the Fair Grounds on Saturday / Photos by Holly M. Smith)

All trainer Keith Desormeaux was hoping entering Saturday’s $200,000 Lecomte (G3) at Fair Grounds Race Course & Slots was that Peter Cantrell’s Call Me Midnight would prove him right, that he was wrong.

“(After his maiden win) I wrongly convinced myself to run him back quickly in Louisville (the Kentucky Jockey Club),” Desormeaux said of his seventh-place finish in the Kentucky Jockey Club (G2). “I wanted to get another start over the track, but it (the plan) was ill conceived. We had plenty of time between that race and today. What gives you confidence is the horse’s confidence. He was exuding that today.”

Settled eighth of nine early under jockey James Graham in the 1 1/16ths mile event, the 28.50-1 longshot Call Me Midnight chased fast fractions of 23.40 and 47.01 set by Gun Runner winner Epicenter, the 1.60-1 second choice. Gaining momentum on the backstretch, he swung six-wide on the turn and sustained his bid to the wire, catching the pacesetter in the final stride to win by a head in 1:44.36, earning ten Kentucky Derby points in the process. It was another ¾ of a length back to the 1.50-1 favorite Pappacap in third.

“They went quick early,” Graham said. “He settled real nice. Halfway down the backside I said, man I’m going to get a piece of this. He was getting to them (the leaders) easy without me having to ask him. Halfway around the second turn I said, well, I just need a spot to go. I wheeled him out down the stretch, gave him all the daylight, and he flew home like he did at Churchill when he broke his maiden. He did it the right way and finished it off perfect.”

Desormeaux and Graham are no strangers to pulling off big upsets in Louisiana Derby (G2) prep races, having teamed up to win the 2012 Risen Star (G2) at 135-1 with Ive Struck a Nerve.

Even though the early fractions were taxing, Winchell Thoroughbreds Epicenter, who dominated the inaugural Gun Runner Stakes on December 26 at Fair Grounds was valiant in defeat for trainer Steve Asmussen.

“He tried really hard,” jockey Joel Rosario said. “He’s a very big horse, very straightforward, everything he does. I know we got beat but he still ran a nice race.”

The most accomplished horse in the field with a grade two win a pair of grade one placings under his belt, Rustlewood Farm’s Pappacap enjoyed a dream run from an inside stalking position. He engaged Epicenter at the quarter-pole and battled him into the deep stretch, only to be turned away in the final sixteenth.

“He fought all the way down the lane,” jockey Joe Bravo said of the Mark Casse trainee. “Both (he and Epicenter) are special horses. They got into a fight and guess what happens, it set up for somebody else to run by both of us.”

That “somebody” was Call Me Midnight, who boosted his career earnings to $221,806 while winning for just the second time in his career (7-2-1-0). He also banked ten Kentucky Derby points.  After earning 4 and 2 points respectively, Epicenter and Pappacap are tied atop the leaderboard with 14 apiece. Trafalgar earned one point for his fourth place Lecomte finish.

“I can’t see why not,” Desormeux said when asked about Call Me Midnight’s potential participation. “Hell, it’s a month away. That’s an eternity the way I run ‘em, but yes, absolutely.” – Kristufek 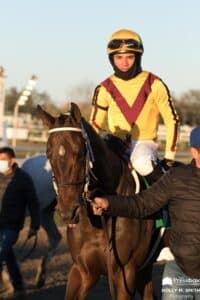 Heading into Saturday’s $150,000 Silverbulletday at Fair Grounds Race Course & Slots many had one question on their minds – which 3-year-old filly would run on the front with La Crete throughout the 1 mile 70 yards?

The answer was Fannie and Freddie in what shaped to be a two-horse race where each competitor put the other away, but in the end, it was Stonestreet Stable’s La Crete who made the last move a winning won, earning 10 Kentucky Oaks points in the process.

She won her first outing last November at Churchill Downs in dominant front-running fashion, so with Joel Rosario back aboard, the tactics for her second start were no surprise. La Crete set the tone early, posting reasonable fractions of 24.50 and 48.79 while clear by as many as 1 ½ lengths. Working from a loose, 3-to-4-wide press through the first turn, the Al Stall Jr. trained Fannie and Freddie set to business at the top of the second turn, heading the 1.10-1 favorite La Crete at the quarter-pole. It was a duel from there. Fannie and Freddie led by a head, but with 1/2 furlong to go Joel Rosario asked for more and got a stunning surge that put the Steve Asmussen-trained filly in the winner’s circle in a final time of 1:43.93 for the 1 1/16ths miles.

“[La Crete] is a special horse,” Joel Rosario said. “It’s unbelievable. It looked like [Fannie and Freddie] was beating me but then she came back and we got the win. That horse moved on me and it looked like she would get the win but then [La Crete] just got better and got confidence from her and we passed her back.”

Fannie and Freddie ran a similar race in the Untapable, where she also had the lead turning home but was passed near the wire by the undefeated North County. She earned four Kentucky Oaks points on Saturday, raising her total to 8 points.

“[Fannie and Freddie] is getting better and better every trip,” jockey Colby Hernandez said. “She’s starting to get her mind in tune now. She has a very good performance. She was a nice filly who beat us and we put her away for a while and the horse came back on us.”

The Matt Shirer-trained Bernabreezy rode the rail four to five lengths back throughout, taking the second turn coupled inside of 2.10-1 second choice Sweet as Pie. With Bernabreezy’s previously demonstrated late kick, after expertly tightening around the homestretch turn, the race set up for the 5.80-1 filly to ride the rail past these two, but she never got closer than two lengths. She would settle for third, 3 ½ lengths behind the winner, earning two Kentucky Oaks points. Candy Raid came on late while wide down the center but never threatened in finishing fourth, earning one Oaks point. The Todd Pletcher-trained Florida invader Sweet as Pie dropped back to last.

The unblemished 2-2-0-0 La Crete earned the right to follow her half-sister Clairiere’s victorious footsteps to February’s Rachel Alexandra (G2). With $159,460 in purse money, she has a new notch under belt having now dueled and beaten a foe in the homestretch.

“She’s a little more forward than Clairiere was early on,” assistant trainer Scot Blasi said. “But as far as working and training for a race they are very similar. We’re going to let (Breeders’ Cup Juvenile Fillies winner) Echo Zulu do her thing. This filly is going to continue to develop, a big step forward here today and we’re just very proud of her. Awesome bred filly from Stonestreet, lucky to have her.”

Likely to be crowned an Eclipse Award winner in short order Echo Zulu, who has been stabled at Fair Grounds for over a month, has yet to appear on the work tab. — Kilroy