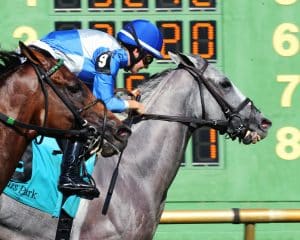 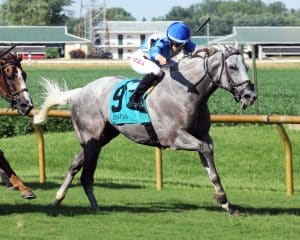 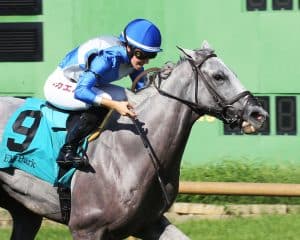 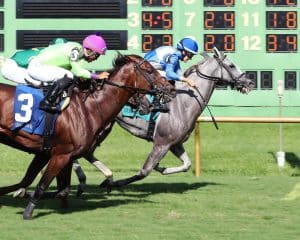 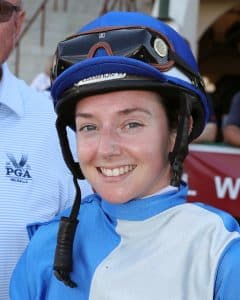 Since taking over the training of Gray’s Fable this spring, Brian Lynch had been trying to unearth just the right formula that would allow the son of Gio Ponti to get back to his winning ways.

The Ellis Park turf helped provide the winning recipe Sunday as the 7-year-old gelding split rivals in the stretch under heady handling from jockey Mickaelle Michel to edge Mr Dumas by a neck in the $100,000 Henderson Turf Mile and give his pilot her first stakes win in North America.

Previously trained by Hall of Famer Roger Attfield, Gray’s Fable came into Lynch’s care following his victory in the Opening Verse Overnight Stakes at Churchill Downs on May 5. His last two outings proved tough going as he finished sixth in both the Arlington Stakes (G3) and Jonathan B. Schuster Memorial – the latter of which he ran into the likes of Grade 1 winner Ivar (BRZ) and multiple graded stakes winner Somelikeithotbrown.

Sent off at odds of 10-1, Gray’s Fable got himself back on track Sunday as he rated off the pace in the 12-horse field and got a perfectly-time ride from Michel, France’s former champion apprentice rider who shifted her tack to the United States this spring.

“I was so confident in my horse and he gave me back everything,” said Michel, who earned her first win in North America at Ellis Park on July 17. “I’m just so happy.”

Michel kept Gray’s Fable fourth from last in the 12-horse field as pacesetter Dreamer’s Disease reached the opening half mile in :47.80 following a first quarter in :24.18. As Dreamer’s Disease began to give way at the top of the stretch, it appeared Tut’s Revenge was poised to reach the wire first as Gray’s Fable was still searching for room. Once Michel was able to come up between horses and get the daylight she needed, her mount burst through on the inside and held off Mr Dumas when that one mounted his own late bid.

“Roger Attfield had handed him over in such good form when he won the stakes at Churchill but then he ran two clunkers for us,” Lynch said. “But he always showed he had the talent so it was nice to see him put it together. It was a great ride, very patient. (Michel) announced her arrival today.”

Gray’s Fable hit the wire in 1:34.93 over a course rated firm to improve his record to six wins from 21 starts with earnings of $376,899.  Race favorite Mr Dumas edged Tut’s Revenge by a head for second.

Owned by Steve Goldfine, Kari Povost, and Jeff Zlonis, Gray’s Fable was bred in Kentucky by Zlonis and is out of the Oratory mare Myrtle’s Gray.