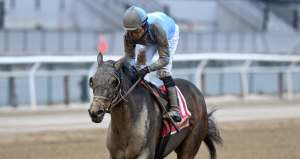 Trained by Linda Rice and piloted by Jose Lezcano, the 5-year-old Tonalist mare rallied stoutly to overtake her stablemate Piece of My Heart and the stubborn pacesetter Miss T Too to score by one length for her tenth career win.

Betsy Blue was claimed for $50,000 in March 2021 out of a winning effort at third asking at the Big A and has now won eight races for her current connections, including the 2021 Bouwerie against fellow state-breds at Belmont Park.

She finished a distant third in the one-mile Grade 3 Go for Wand over a sloppy and sealed main track here on December 3 but returned one week later to take the six-furlong Garland of Roses versus open company.

“She’s a great filly to have in the barn for almost two years now. I was impressed with her first two races before claiming her,” said Rice, who missed out on haltering Betsy Blue for $25,000 in her second-out graduation. “I actually was out-shook on her and then we doubled up on her. There was a seven-way shake on her the first time and the second time it was just us. We had to reach a little harder.”

Miss T Too was hustled out of the gate by Eric Cancel to set the Interborough pace with Flight to Shanghai and Self Isolation tracking her early foot through a quarter-mile in 23.54 seconds over the fast main track. Flight to Shanghai pressed the pace down the backstretch with Self Isolation angling off the rail in attempt to split the front pair as Betsy Blue watched from last-of-5 through a half-mile in 47.20.

The Kendrick Carmouche-piloted Piece of My Heart rushed up the rail through the turn as Betsy Blue began to steadily make up ground from her outside perch with a five-wide rally with Miss T Too clinging to a precarious lead turning for home. The pacesetter dug in gamely but she was no match for Betsy Blue, who powered by inside the final sixteenth to secure the win in a final time of 1:25.94.

Piece of My Heart persevered through the final jumps to complete the exacta by one length over a game Miss T Too with Self Isolation and Flight to Shanghai rounding out the order of finish. Easy to Bless was scratched.

“She might be better at six to six-and-a-half [furlongs], closing into faster fractions. I’m not sure seven-eighths to a mile is her best distance, but she’s pretty versatile,” Rice said.

Bred in the Empire State by Blue Devil Racing Stable, Betsy Blue, out of the stakes-placed Yonaguska mare Honest to Betsy, banked $55,000 in victory while improving her record to 21-10-7-2. She returned $2.60 for a $2 win wager.

Lezcano, who won three races on the card, said he wanted to engineer a clean trip for Betsy Blue.

“I saw the three horses go head-to-head there [on the lead] and I kept her in the clear,” Lezcano said. “In the middle of the turn, the one horse [Flight to Shanghai] kind of went out a little, but she was the best filly in the race and she showed it.

“She’s so good,” added Lezcano. “She keeps holding her form and in every race, she keeps running better and better. She’s a nice horse and there’s nothing more I could ask for.”

Carmouche said Piece of My Heart performed admirably against her stellar stablemate.

“I had a perfect trip and I rode the race to win, because I knew Lezcano would have to go around,” Carmouche said. “I figured I would see if I could get a short way home and she ran good, she was just second best. You’ve got to run almost a 110 Beyer to beat that filly. It’s tough.”