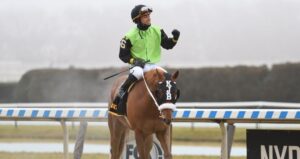 (Courvoisier wins the Jerome on Saturday / Photo Courtesy of NYRA)

The Jerome awarded 10-4-2-1 Kentucky Derby qualifying points to the top four finishers, respectively. By Tapit and out of the 2014 Breeders’ Cup Juvenile Fillies and Eclipse Award-winner Take Charge Brandi, Courvoisier splashed over the slop and through a dense fog under Jose Ortiz to win his stakes debut for trainer Kelly Breen after breaking his maiden going nine furlongs last time out at the Big A.
Breaking from post six in the field of eight, Courvoisier found himself mid-pack a few strides from the gate before splitting horses and moving to the outside of pacesetter Hagler, who was piloted by Trevor McCarthy. Racing down the backstretch, Ortiz kept Courvoisier close to Hagler through a half-mile in a speedy 45.78 seconds.
Ortiz showed Courvoisier the crop to his right side rounding the turn, giving him the signal to make his move at Hagler as McCarthy began to give his mount a strong hand ride. Hagler battled back on the inside at the top of the lane but began to tire as Courvoisier found more and overtook the lead at the eighth pole.
Driving to the finish with two right-handed taps of the crop from Ortiz, Courvoisier widened his margins briefly at the sixteenth pole before needing to fend off one last bid from runner-up Smarten Up under Anthony Salgado in the center of the racetrack. Courvoisier had enough left in the tank to finish strongly, besting Smarten Up by 1 ¼ lengths with post-time favorite Cooke Creek checking in two lengths back in third. The final time for the mile was 1:38.86.
“He broke good but the eight-horse [Hagler] had some speed too, and it looked like he wanted it,” Ortiz said of his battle for the lead. “Crossing the chute, my horse was traveling really well and I was really happy with the position I had.
“Passing the three-eighths pole, I had to ask him a little bit but Kelly gave me the warning – he said, ‘he’s not going to give you anything you don’t ask for, so you have to keep pedaling and he will dig in,’” Ortiz added. “And he did. He kept digging in and I’m just happy we got the win.”
Ortiz, who rode Courvoisier for the first time in the Jerome, said he was unsure of the mile distance for the chestnut colt.
“I was a little bit concerned,” Ortiz said. “Personally, I’m not a fan of stretching to a mile and an eighth and cutting back to a mile, but he’s sharp. He’s got tactical speed – which helps him – and I think those kinds of horses you can play around with them. He’s the right kind of horse to do it and he did it successfully, so kudos to Kelly and the team.”
Salgado said Smarten Up still had something left to give in the final stages despite a poor break and being forced six-wide in the turn.
“He broke a little bit slow,” said Salgado. “It wasn’t a perfect trip. He was getting dirt in the face and jumping a little bit, but in the stretch, when I asked him, he kept coming. Once we got clear, he kept going.”
Rounding out the order of finish were Unbridled Bomber, Hagler, Mr Jefferson, Ohtwoohthreefive, and Rumble Strip Ron.
The Jerome was the second career win for Courvoisier, who had won or finished on the board in each of his prior four starts. The colt put on blinkers to earn two runner-up finishes by small margins at Delaware Park before breaking through in a December 2 maiden special weight at Aqueduct by a neck.
Breen said despite the off-going on Saturday, Courvoisier has shown a fondness for the Big A.
“He does everything right,” said Breen. “He just needed to put it all together. He was being very juvenile in his first couple of races and I think this is the beginning of him moving forward.”
Breen said Courvoisier will now target a start in the Grade 3 $250,000 Withers, a nine-furlong test on February 5 at the Big A offering 10-4-2-1 Kentucky Derby qualifying points.
“In two weeks, he’ll have two more workouts and we’ll be right on line to run,” said Breen. “Right now, it looks like has a nice affinity for Aqueduct and in four more weeks is the Withers going two turns. We’re excited for it because it’s where we were pointing him. We didn’t know if we were even going to run in the Jerome because we believe he is a two-turn horse.”
Bred in Kentucky by Elevage II and Hill ‘n’ Dale, Courvoisier earned $82,500 in victory and brought his total purse earnings to $147,450 with a record of 2-2-1 from five starts. A $2 win wager placed on Courvoisier returned $10.
Live racing at the Big A resumes Sunday with nine-race card, featuring the La Verdad for state-bred fillies and mares in Race 8. First post is 12:20 p.m. Eastern.
America’s Day at the Races will present daily coverage and analysis of the winter meet at Aqueduct Racetrack on the networks of FOX Sports. For the complete broadcast schedule, visit https://www.nyra.com/aqueduct/racing/tv-schedule.
2022-01-02T12:48:10-05:00By The Pressbox Staff|