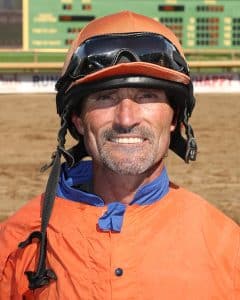 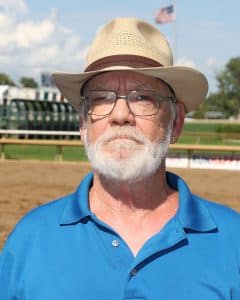 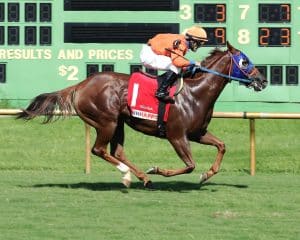 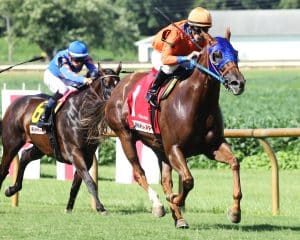 Shortly after the break in the $100,000 Laguna Distaff Turf Sprint Stakes at Ellis Park, jockey Thomas Pompell realized his pre-race expectations for his mount Creative Credit were about to go out the window.

“I figured we were going to have to come off the pace today,” Pompell said before adding with a grin, “That didn’t happen.”

Left to have things her own way on the front end, Creative Credit showed her nine rivals why she has been on such a tear of late as she led every point of call during a two-length victory in the 5 ½-furlong Turf Sprint Stakes, her fourth consecutive triumph.

While Creative Credit often does her best work on the front end, her connections figured there would be more speed set to challenge the 5-year-old mare on Sunday. The pace they saw on paper didn’t materialize once the running began though as Creative Credit was clear by about a length while she cut fractions of :22.03 and :44.22 up front with Elle Z tracking in second.

“We didn’t want to be in match with all of them, but she has been breaking good and she broke so good today I just kind of grabbed her,” Pompell said. “When they came to me, I just let her out a notch.”

Sent off at 11-1 odds, Creative Credit continued to get separation on the field around the far turn and held a two-length advantage at the top of the lane. Under mild urging from Pompell, the daughter of Creative Cause was never threatened on her way to earning her second straight stakes win.

“This is her mother’s one good foal, and she’s a good one,” owner/breeder Richard Finucane said. “I’ve had some nice horses but she’s fast.”

Brooke Marie got up for second by a head over Tobys Heart as Violenza and Social Chatter completed the top five. Final time for the distance was 1:02.35 over a course rated firm.

Creative Credit began her win streak with a victory at Belterra Park on June 1 and was coming into the Distaff Turf Sprint off a win in the Clarksville Stakes at Horseshoe Indianapolis on July 13.  Trained by T.R. Haehn, the chestnut mare has now won eight of 18 starts with earnings of $206,176.

Bred in Kentucky by Finucane, Creative Credit is out of the Najran mare Credit Crunch.