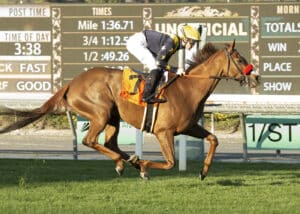 FLAVIEN PRAT, LUCK, WINNER: “I’m pretty sure the cut back in distance helped. She had some pace to run at and she gave me a good kick when it was time to make a move.  I was saving ground pretty much all the way around and around the quarter pole I thought I had a lot of horse and just wanted to get a good run, she responded well.”

RICHARD BALTAS, LUCK, WINNER: “She’s a very special filly.  She got beat the last time because of the slow fractions.  They weren’t going too fast today, but she ran like we knew she was capable of running.  We are thankful to have a filly this good and thank the ownership of Jaime Roth and LNJ Foxwoods for this great opportunity.  She is a half-sister to Goldikova, so we have to start looking at a Grade I race sooner or later for her.”