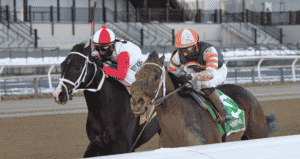 Eddie F’s Racing’s Lobsta secured his second consecutive stakes win after being elevated to victory when My Boy Tate – who crossed the wire first – was disqualified and placed fourth in Saturday’s $100,000 Say Florida Sandy, a seven-furlong sprint for New York-breds 4-years-old and up, at Aqueduct Racetrack.

Alpha Chi Rho, piloted by Jose Ortiz, marked off splits of 22.84 seconds and 46.41 over the fast main track. But an eventful stretch run saw Alpha Chi Rho maintain a precarious lead late in the turn as Battle Station, under Kendrick Carmouche, loomed large while applying pressure from the outside.

With five horses in with a chance at the top of the lane, a tiring Alpha Chi Rho took back as Battle Station angled over to establish a head advantage at the stretch call.

The Eric Cancel-piloted My Boy Tate, full of run behind rivals approaching the eighth pole, squeezed through a narrow opening to the inside of Battle Station and to the outside of rail-surging Chestertown [Jose Lezcano], who checked and was forced to take back.

Hall of Famer Javier Castellano kept to task aboard Lobsta, who was in the clear outside of the battling rivals, engaging in a stirring duel to the wire with My Boy Tate, who prevailed by a neck in a final time of 1:25.63. Battle Station finished third, four lengths back of Lobsta. Rounding out the order of finish was Chestertown, Saratoga Pal and Alpha Chi Rho.

A stewards’ inquiry and multiple claims of foul were launched, including Ortiz claiming foul against Battle Station at the top of the stretch which was disallowed.

A trainer and jockey’s objection from the connections of Chestertown against My Boy Tate for interference at the eighth pole was allowed, resulting in My Boy Tate being disqualified from victory and placed fourth. Battle Station and Chestertown each moved up one placing in the order of finish.

Castellano, who flew in from Florida to retain the mount aboard Lobsta, was full of praise for the disqualified winner.

“I think I was a beneficiary [of the disqualification]. I don’t want to take anything away from [My Boy Tate]. It seemed to me he was much the best,” Castellano said. “He had a lot of trouble and tried to split horses. But he bothered a couple horses inside and cost the second, third and fourth places. You have to apply the rules. I think the stewards made the right decision. He didn’t bother me, but he bothered the rest of the field when he tried to split horses. I believe I got lucky that I was on the outside and in the right place at the right time to finish second.”

Lobsta entered the Say Florida Sandy after earning a career-best 96 Beyer Speed Figure from a half-length score over My Boy Tate in the NYSSS Thunder Rumble on December 5 at the Big A while carrying six pounds less than his rival. Lobsta and My Boy Tate were on even terms Saturday, carrying a co-field high 124 pounds.

Castellano said Lobsta was game to the wire.

“He got a little tired with the track today,” Castellano said. “Don’t get me wrong – he tried really hard and fought all the way to the end. But he got tired a little bit in the end. We didn’t have racing yesterday and had a lot of snow. The track had a lot of moisture and I think it seemed the speed carried a bit. They went pretty quick. It’s good to see these two New York-breds match each other because I beat him good last time. Now he beat me good. I’m excited for the next race. If the owner wants me, I’ll be back.”

Cancel said he tried to maintain his lane while guiding My Boy Tate between rivals.

“Lezcano [aboard No. 2, Chestertown] and I were there. Jose Ortiz [aboard No. 1 Alpha Chi Rho] was on the outside, so we had enough room for both of us, but once they started putting pressure from the outside that’s when it got bad,” Cancel said. “I tried to maintain my spot but there wasn’t a whole lot I could have done. It was really tight and too little of a spot to play with.”

Despite the disqualification, Cancel said his horse ran a winning race.

“He’s a big grinder. He knows what he needs to do. You just have to sit patient on him and time it right and he’ll give you everything he’s got,” Cancel said. “I wanted to tip out a little bit, but I had three horses on the outside all lined up. I just tried to make the right choice with him. He knows what he needs to do and he can sit behind horses with no problem.”

Lezcano said Chestertown, who was elevated to third, might have won if not impeded.

“I think I had the best horse today, but we got killed. I got my spot taken,” Lezcano said. “There was too much pressure from the horse on the outside [Battle Station].”

“He ran huge off the 96 [Beyer],” Fazzone said of Lobsta. “There was always a chance for him to bounce, but he didn’t. He showed he was the real deal. Chowda ran a great race today too, so we have some real nice horses here. Hopefully, they both continue to do well. I think Lobsta is getting better with every start. My Boy Tate is a great horse. Take nothing away from him, he’s a game horse and never runs a bad race.

“This is our third stakes win,” Fazzone added. “We’re a small stable with nine horses and it seems like it just gets better and better. I’ve got his half-brother Oysta who just turned two, so hopefully we see him in the spring or summer. Hopefully, we continue the great ride.”

Trainer Gary Sciacca said the 4-year-old son of Emcee, out of the Chief Seattle mare Salty Little Sis, demonstrated his talent in the game stretch duel with My Boy Tate.

“They both ran great. You can’t take anything away from either one of them,” Sciacca said. “He showed he was for real. He ran great, I’m pleased with him. I’m really happy for Eddie. Everyone came down for the win picture, so it was nice having them.”