Notes & Quotes From the Silverbulletday Stakes: The Alys Look

Notes & Quotes From the Silverbulletday Stakes: The Alys Look 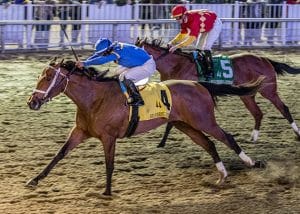 Seven fillies entered the $150,000 Silverbulletday presented by Fasig-Tipton, but it was the Brad Cox-trained duo who pulled away from the pack. Ike and Dawn Thrash’s The Alys Look, the longer price of the two at 2-1, fought off her stablemate and odds-on favorite Chop Chop in the final stages to win by one length at Fair grounds Race Course & Slots.

The Alys Look pressed front-runner Hayunevno from the two-path as the early leader clocked in early calls of :24:37 and :48:08. Never keeping her stablemate out of sight, Chop Chop stalked three-wide as The Alys Look eagerly took the lead in the second turn.

Chop Chop continued to lose ground, drifting from the four path to the nine path while grasping for The Alys Look, who embraced the challenge and proved her staying power. The two Cox fillies finished a far cry ahead of Hayunevano who held on for third 14 ½ lengths back.

The Alys Look clocked 1 mile 70 yards on a fast track in 1.43.55 under jockey Luis Saez, earning 20 points towards a potential run in the Longines Kentucky Oaks. Combined with the four points she earned finishing second to Pretty Mischievous in December’s Untapable, the Connect filly out of the Harlan’s Holiday dam Foul Play now has 24 qualifying points, second only to Wonder Wheel, who has banked 40.

“The plan was to break sharply from there and she did,” Saez said. “We were in a great spot. She was pretty game too. When we came to the top of the stretch, she didn’t want to let the other horse (Chop Chop) go by. She tried hard.”

In what was the third race of her form cycle, The Alys Look may have had a fitness edge on Chop Chop, who hadn’t run since finishing last as the favorite in the Breeders’ Cup Juvenile Fillies at Keeneland.

“It’s a combination of both,” Cox said when asked if the Aly’s Look really stepped up or if Chop Chop needs to take a step forward. “Chop Chop may have needed the race. She was freshened up a little bit since the Breeders’ Cup. She had been training well and gave us the confidence to run her today and she ran well. Proud of the effort. The Aly’s Look has that one race at Churchill in the mud with blinkers on, she was rank early, you’ve got to draw a line through that race. She’s a good filly. She really showed some determination and grit the last sixteenth of a mile today and I think we have to make a march towards the (Kentucky) Oaks. We will see how she comes out of it.”

Cox and Saez took the Silverbulletday-Lecomte double when two races later Cox’s colt Instant Coffee won the Lecomte. On “Road to the Derby Kickoff Day,” last month, the Cox barn sent out winners in three of the four 2-year-old stakes, including Jace’s Road win in the Gun Runner, Corona Bolt’s win in the Sugar Bowl, and Dazzling Blue’s win in the Letellier.

Luis Saez bagged three total on the day, also winning on Derby-hopeful Determinedly in an allowance race earlier in the card.

Selective LLC’s Chop Chop’s second place-finishing added 8 qualifying points to the 4 she earned finishing second to Wonder Wheel in the Alcibiades (G1). The City of Light filly was ridden by Florent Geroux, who won the opening race (new Destiny) but finished second in three races on the card as he chases career win 2,000.

“(Chop Chop) had run close to the pace before, but I wasn’t trying to get to the lead,” Geroux said. “She went perfect, a little bit wider than I would’ve liked. She felt great and tried hard. I was right by the winner but just couldn’t run her down. My filly got a little bit tired, maybe she needed a race. She hadn’t run since the Breeders’ Cup, and the winner had two recent races. I’m hoping next time with a race under belt, she can move forward.”

(Hoosier Philly / Photos by Holly M. Smith) Will Hoosier Philly Run In Kentucky Derby? It is too soon to begin the discussion in earnest — perhaps — but the questions are starting to percolate. If the undefeated and spectacular filly Hoosier Philly continues to dominate her classmates this Sprin...
2    View on Facebook