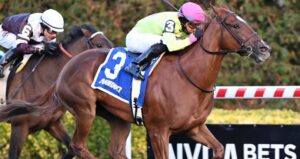 Plum Ali asserted herself back to the win column, ending a seven-race losing streak with a knockout performance in Sunday’s sixth running of the $150,000 Winter Memories for sophomore fillies going 1 1/16 miles over the inner turf at Aqueduct Racetrack.

Plum Ali, a First Samurai chestnut, commenced her career by rallying to three victories in as many starts during her juvenile season, including triumphs in the Mint Juvenile Fillies at Kentucky Downs and the Grade 2 Miss Grillo at Belmont Park.
Despite struggling to find the winner’s circle this year, she remained competitive at a high level, finishing third in the Grade 2 Appalachian in April at Keeneland and second in the Grade 3 Wonder Again two months later at Belmont Park.
The Christophe Clement trainee displayed new tactics Sunday and found herself on the front end maintaining command throughout, capturing a third career stakes win by three-quarters of a length under Manny Franco.
Trainer Quotes:
Christophe Clement — Plum Ali (1st):
“The idea was to be forwardly-placed and she ran very well,” said Clement, who saddled Feel Glorious to victory in the 2019 Winter Memories. “He gave her a great ride. She’s been very unlucky and the filly deserved this. The idea was to be 1-2-3 and, if possible, on the lead. If anybody took us on, then sit second or third. Nobody took them on and when I saw the 49 and change and 1:15, I knew she was going to be pretty tough. She’s a very nice horse.”
Bill Mott — White Frost (2nd):
Hall of Fame trainer Bill Mott, who saddled White Frost, said his filly ran well off the bench.
“There was a bit of a slow pace. A faster pace would have helped us out a little bit. She ran well coming off a layoff of eight or nine months,” Mott said. “She got loose nearly the length of the stretch. She had to wait a little bit around the turn. She was fishing a bit around the turn but found room late and got a clear run up the stretch. She ran well. She’ll go to Payson [Park Training Center in Florida].”
Jockey Quotes:
Manny Franco — Plum Ali (1st):
Franco said he felt confident in the second half of the backstretch run.
“After we broke like that, I wasn’t thinking to take back. If they wanted to take the lead, they would have to go faster than me,” Franco said. “In the second part of the race, they let me slow down the pace and that was it. She handled it really well.”
The Winter Memories was Franco’s second time aboard Plum Ali after piloting the filly to a last-out fifth in the Grade 2 Sands Point on October 16 at Belmont.
“She’s been really unlucky but today she deserved this,” said Franco, who rode 2018 Winter Memories winner Matty’s Magnum. “I’m really happy for Christophe and the owners.”
2021-11-15T09:55:09-05:00By The Pressbox Staff|