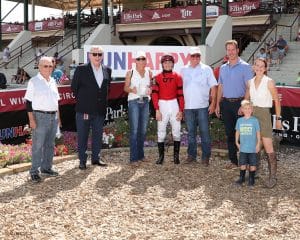 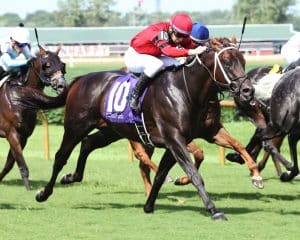 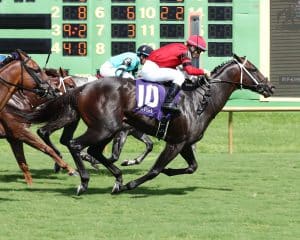 (All in Sync / Photos by Coady Photography & Courtesy of Ellis Park)

It’s not every day a horse trained by Hall of Famer Steve Asmussen coming off a stakes victory will go to post at double digit odds in their next start.

While the betting public may not have been sold on All in Sync following his first appearance at Ellis Park last month, the son of Maclean’s Music rewarded all those who showed faith in him on Aug. 7 with when the 22-1 shot burst through between horses in late stretch to take the $100,000 Twin Spires Turf Sprint at the Pea Patch in his turf debut.

The 5 ½-furlong Turf Sprint was the first of four stakes races on the Ellis Park card Sunday.

Owned by Ed and Susie Orr, All in Sync was supposed to try the lawn for the first time in Dade Park Dash Overnight Stakes at Ellis Park on July 10 but that race came off the turf due to soggy conditions. Just as the 3-year-old colt showed his grit that day when he bested graded stakes winner Call Me Midnight by a head to notch his first stakes triumph, he showed similar mettle Sunday against a seasoned group of older sprinters.

As Into the Sunrise and Thanks Mr. Edlson battled each other on the front end through strong fractions of :21.86 and :44.48 over a firm turf, All in Sync rated near the back of the nine-horse field in an outside path. When the field fanned out coming off the far turn, All in Sync came rolling under jockey Vincent Cheminaud with graded stakes winner Totally Boss to his outside and Bad Beat Brian on his inside, getting up in the final jumps to best Charcoal by a neck.

“He came into the race very different than last time,” said Marissa Short, assistant to Asmussen. “He’s been very confident and kind of a handful around the barn. It’s been fun to see him evolve into this kind of horse and coming into today, I knew we were a longer shot but I had a feeling he would run pretty well. He did more than well for us today.”

“I’ve known this horse since he was a 2-year-old and watching him be so close today was just like a mild panic attack. You don’t know what emotions to express. It’s been great to watch.”

It was a blanket finish at the wire with Charcoal taking place honors by half a length over Bad Beat Brian with Totally Boss a nose back in fourth.

Bred in Kentucky by Philip Steinberg, All in Sync improved his record to four wins from nine career starts with $280,228 in earnings. He was purchased by the Orrs for $310,000 out of the 2021 OBS April Two-Year-Olds in Training sale and is out of the Girolamo mare System Time.