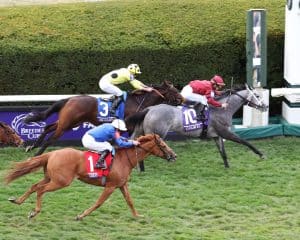 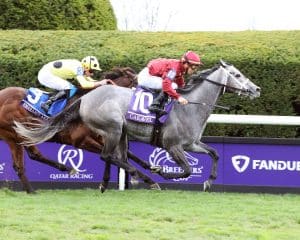 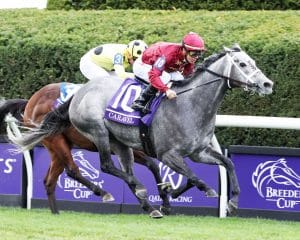 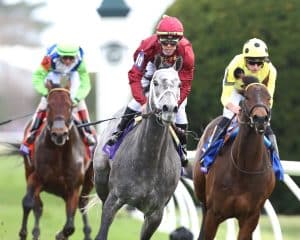 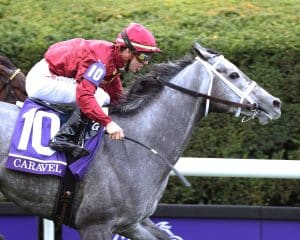 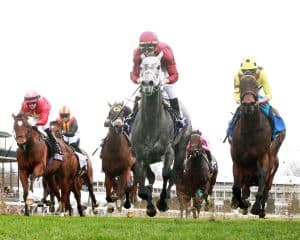 Qatar Racing, Marc Detampel and Madaket Stables’ Caravel ($87.78) shot to the front out of the gate and led all the way to score a half-length victory over Emaraaty Ana (GB) in the 15th running of the $1 million Breeders’ Cup Turf Sprint (G1) for 3-year-olds and up Saturday afternoon at Keeneland.

Trained by Brad Cox and ridden by Tyler Gaffalione, Caravel completed the 5 1/2 furlongs on a firm turf course in 1:01.79. It is the ninth Breeders’ Cup victory for Cox and the second for Gaffalione. It is the first victory in the race for both.

Defending champion and heavy favorite Golden Pal missed the break and spotted the field several lengths as Caravel quickly got over from post 10 and secured a spot next to the rail.

She withstood pressure from Artemus Citylimits in the run down the backstretch and then in the stretch fended off an inside bid from Emaraaty Ana to prevail. Creative Force (IRE) finished a neck behind Emaraaty Ana for third.

Golden Pal, who rushed up to midpack after the bad start, faded in the stretch and finished 10th.

Winning trainer Brad Cox (Caravel): “She was running back in 20 days, but had a race over the course. She was doing extremely, extremely well. She’s filly that has had a hard time keeping on weight and since the end of the summer, she’s really blossomed. We decided to take a swing and it worked out.”

Winning jockey Tyler Gaffalione (Caravel): “I feel amazing. She broke alertly. No one really went, so I decided to take control of things. Coming into the stretch, she just kept finding more. She’s a very solid filly. She shows up every time. She’s trained by one of the best in the country, Brad Cox. He brings them over ready to fire.”

Second-place assistant trainer Adam Ryan, son of trainer Kevin Ryan (Emaraaty Anna): “All credit to our traveling lad, Umar (Mohammed), who has been with him all week and has him perfect. We thought we were going to get there and it was a great race. I know he was a big price, but we couldn’t have the horse in better condition. We had the right man on board in Ryan (Moore). Fair play to the winner. (Caravel) is obviously a very brave filly.”

Third-place trainer Charlie Appleby (Creative Force): “He broke so well and Will (William Buick) had a nice pitch, but Flotus came across on us and floated us back a bit. But, look, he’s put up another solid performance and doesn’t know how to run a bad race, this horse. We know he was doing his best work towards the end and that was always going to be the way, being a six-furlong horse. I’m delighted. Another solid run from him. Couldn’t be happier with him.”

Naval Crown: “I think it was always going to be a bit hard for him at that draw.”

Fourth-place trainer John Quinn (Highfield Princess): “She ran another great race. I couldn’t be more proud of her. She’s had a long season so she’ll have a well-deserved holiday now and she’ll come back in to training for next season. Jason Hart said she was all heart again and ran a blinder. It’s been a great experience coming to the Breeders’ Cup again and hopefully we’ll be back again.”

Fifth-place jockey Juan Hernandez (Artemus Citylimits): “He went pretty good. Broke sharp. I was outside of the speed where I wanted to be. The horse fought me a bit, but gave me the best he had. I was in really good spot. On the turn, I asked him and he started running right away. He switched a little late, but he ran pretty good.”