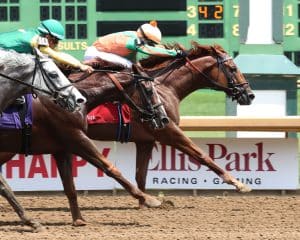 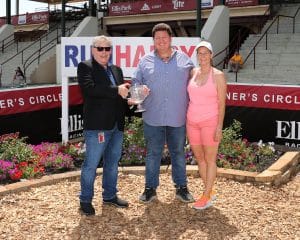 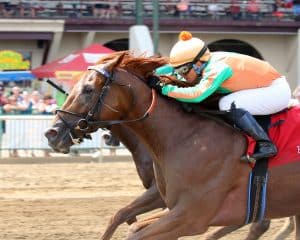 NECKER ISLAND WINS THE JEFF HALL MEMORIAL STAKES AT ELLIS PARK
The first time Necker Island raced at Ellis Park, he used his time at the Pea Patch to prove he deserved a chance to test himself against the best of his generation at the classic distance.
In his most recent outing at the Henderson, Ky oval, the son of Hard Spun drove another point home where his career aspirations are concerned.
Necker Island’s evolution from Kentucky Derby (G1) starter to accomplished sprinter added another chapter on July 24 as the 5-year-old horse found daylight between rivals in mid stretch en route to earning a neck victory over Tut’s Revenge and seven others in the $75,000 Jeff Hall Memorial Stakes.
The 6 1/2-furlong Jeff Hall Memorial was run in honor of Ellis Park’s longtime popular director of racing operations who died on June 4 at the age 75.
Hall was known as the heart and soul of the track he worked at for more than 50 years, and Necker Island proved a fitting victor in displaying his share of mettle during a drive that saw him battle to find room under jockey Mitchell Murrill. Being a gutsy sort has been the modus operandi for Necker Island during his 26-race career, however, as the chestnut horse used a third-place finish in the 2020 Runhappy Ellis Park Derby as a steppingstone for what would be a ninth-place run in that year’s COVID-delayed Kentucky Derby.
Since cutting back in distance beginning with an allowance win going seven furlongs at Churchill Downs last October, Necker Island has not only rejuvenated his career but is enjoying his best results yet. He earned his first stakes win in the six-furlong Bet on Sunshine beneath the Twin Spires last November and his triumph in the Jeff Hall marked his seventh career victory, four of which have come in the last 10 months.
“He’s been special to us for sure, being our first Derby starter,” trainer Chris Hartman said of Necker Island. “He’s turned into a nice sprinter. I think when we ran him in the Derby, it was never a distance he really wanted to be at. But it was a bucket list for the owner and it was where we had him. But he’s where he wants to be now.”
Necker Island was not where Hartman wanted him to be a few weeks ago when he had a troubled trip on his way to finishing second in an allowance race at Churchill Downs on July 2. The betting public sided with the trainer in believing his charge was better than what he showed in that outing, sending him off the 6-5 favorite in the Jeff Hall over a group that included his old rival Bango, who had bested him in the June 4 Aristides Stakes.
With expected pacesetter Kneedeepinsnow scratched, the complexion of the Jeff Hall shifted such that the aforementioned Bango found himself on the lead out of post No. 4, setting fractions of :22.58 and :45.44 with Robo Man at his neck in second. As the field came off the far turn, Murrill angled Necker Island off the inside path he had been tracking in and surged up between Robo Man and Tut’s Revenge, hitting the wire in a final time of 1:15.23 over a track rated fast.
“He’s an awesome horse. He puts you right in the race where you need to be,” Murrill said of his mount. “Every now and then he can get aggressive and it puts me in tough spots but today it worked out perfect. I was able to tuck in and stay where I was and split horses down the lane.
“He was the best today, as he should be.”
Tut’s Revenge held for second, a neck in front of Surveillance in third while Bango faded to sixth.
Strongconstitution was a late scratch.
Owned by the Scherr Boys, Necker Island was bred in Kentucky by Stonestreet Thoroughbred Holdings out of the Mr. Greeley mare Jenny’s Rocket. Sunday’s triumph was his first in three starts at Ellis Park, having also finished third in the 2021 Kentucky Downs TVG Preview Mint Million Stakes, and he improved his career bankroll to $780,657.
2022-07-25T11:58:42-04:00By The Pressbox Staff|