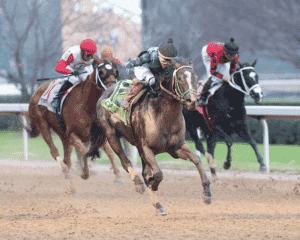 Amescua Making the Most of First Oaklawn Experience

Amescua saddled three winners New Year’s Eve, his first career strikes at Oaklawn since migrating from his native California to Hot Springs for the 2021-2022 meeting that began Dec. 3.

“Every now and then, it flops out right,” Amescua said following training hours Wednesday morning.

Amescua, 59, said the hook to Oaklawn came through another California trainer, the late Mel Stute, who brought a small string to Oaklawn in 1989 and recorded four career stakes victories in Hot Springs, notably the $250,000 Oaklawn Handicap (G2) for older horses in 1987 with champion Snow Chief.

Already armed with more than 900 career victories, the bulk coming in California, Amescua added to his total Dec. 31 when he won the third race with I’m the Boss of Me ($8.60), seventh race with Apprehend ($8) and the ninth race with Melting Snow ($25.80).

All three winners were previously with Southern California-based Peter Miller, who announced in November that he was taking a sabbatical from training.

“The primary amount of horses here came from (Los Angeles),” Amescua said. “Pete Miller asked me if I was interested in coming here. He gave me these horses to give it a shot with, so that’s kind of how that came to fruition, even though I was sort of looking for a way to get here anyway.”

Amescua, who came up under the late Mike Mitchell and Ron Ellis, started his first horse in 1987, according to Equibase, racing’s official data gathering organization. Through Friday, Amescua had recorded 935 victories and his horses had earned $11,191,096 in purses. He had been a fixture in California, particularly the Bay Area, before relocating to the Midwest for the first time.

“I’ve had a pretty good run on my own,” Amescua said. “I haven’t had, like, any big super horses, but we always manage to win some races.”

There isn’t a stake Sunday at Oaklawn, but the eighth race could pass for one.

Sunday’s featured eighth race is a 1 3/16-mile allowance event for older horses that could be a steppingstone for several entrants to the $150,000 Temperence Hill Stakes at 1 ½ miles April 2. It has drawn a field of nine.

The 5-2 program favorite is Night Ops, a Grade 3 winner of $905,823 for trainer Brad Cox and prominent Arkansas owner Steve Landers. Night Ops recorded his biggest local career victory to date in the $350,000 Essex Handicap for older horses in 2020.

“He had a long year,” Cox said. “Freshened him up a little bit, but he’s a very sturdy horse. He’s danced a lot of dances and still going strong.”

Rob Atras is scheduled to send out his first starter of the 2021-2022 Oaklawn meeting in You’re to Blame, among five recent arrivals for the New York-based trainer.

In You’re to Blame’s first start for his new connections, he finished third in a Nov. 21 allowance/optional claimer at Churchill Downs. The winner, Beau Luminarie, returned to run a strong third behind millionaire multiple Grade 2 winner Lone Rock and Thomas Shelby in the $150,000 Tinsel Stakes Dec. 18 at Oaklawn.

“He ran a really good race at Churchill and we were hoping he would move forward off that race,” Atras said. “We’re not really exactly sure why he ran so dull the other day here. We’re not sure if it was the track or he was down on the inside or no Lasix. We’re not really sure, but maybe it was a combination of things. Of course, we’re hoping he’ll set better down there.”