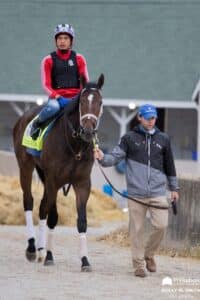 After beginning 2021 with a bang, Caddo River will try to go out with a bang when the star-crossed 3-year-old returns in Sunday’s eighth race at Oaklawn, a 1-mile conditioned allowance test that will mark the colt’s first start in more than six months.

After being withdrawn from Kentucky Derby consideration because of a minor illness, Caddo River received a lengthy vacation following a flat performance in the 7-furlong Woody Stephens.

“We just gave him time,” trainer Brad Cox said Thursday afternoon. “He had no injury. Just time and freshen him up. To try to make the Derby and all that, it’s very demanding on a horse. It felt like it had kind of taken its toll between all of that, the whole winter. The race in the Woody Stephens was not what we were looking for, so we gave him time and he’s come back and trained very, very well. I think this is a really good race to get him back going.”

Caddo River resumed training in late summer/early fall, Cox said, and returned to the work tab at Blackwood Stables in Kentucky before moving to the trainer’s barn at Churchill Downs. Caddo River breezed three times in November at Churchill Downs and has logged three works in his return to Oaklawn, including a 6-furlong bullet (:59.80) Dec. 4.

Facing older horses for the first time Sunday, Caddo River is the 8-5 program favorite and scheduled to break from the rail under regular rider Florent Geroux. Also entered in the projected eight-horse lineup is Irish Unity, runner-up in the $250,000 St. Louis Derby for 3-year-olds Aug. 28 at FanDuel Sportsbook and Horse Racing for Hall of Fame trainer Steve Asmussen.

Cox said Caddo River’s comeback race could help determine where he stands among the trainer’s deep roster of older horses in 2022.

“We have Plainsman there as well,” Cox said, referring to the multiple Grade 3 winner he trains for Anthony. “We have Warrior’s Charge, Night Ops, Shared Sense is down here (Fair Grounds). We have Mandaloun, Concert Tour. We have a very good group of horses. Listen, he’s going to have to step up. He was a very, very good 2/3-year-old. Some of them take those steps forward, some of them don’t. If he takes a step forward, he’ll be fine and, hopefully, he will be a player in the handicap division there.”

Caddo River has amassed $404,092 in earnings after compiling a 2-3-0 mark from seven lifetime starts. Caddo River broke his maiden by 9 ½ front-running lengths at 1 mile in November 2020 at Churchill Downs before winning the Smarty Jones, his stakes debut, in his next start.

Probable post time for Sunday’s eighth race is 3:46 p.m. (Central). In Sunday’s sixth race, Cox is scheduled to send out unbeaten Como Square in an entry-level allowance sprint for 2-year-old fillies. Another Anthony homebred, Como Square is by super sire Into Mischief and a half-sister to Caddo River. Como Square exits a 4 ¾-length debut victory Nov. 11 at Indiana Grand.

Caddo River and Como Square are out of the Anthony-raced Pangburn, a daughter of Congrats who was an allowance winner in 2015 at Oaklawn.

Devil in the House?

Trainer Brad Cox said Thursday afternoon that multiple Grade 1 winner Shedaresthedevil should return to his barn early next month to begin serious preparations for a 2022 campaign that figures to again unfold at Oaklawn.

Co-owned by Staton Flurry of Hot Springs, Shedaresthedevil opened 2021 with a victory over Letruksa in the $350,000 Azeri Stakes (G2) for older fillies and mares in March at Oaklawn. Her final start this year was a sixth-place finish in the $2 million Breeders’ Cup Distaff (G1) Nov. 6 at Del Mar. Shedaresthedevil, as a racing/broodmare prospect, sold for $5 million at Fasig-Tipton’s Fall Mixed Sale Nov. 9, but will remain with Cox for a 2022 campaign. Flurry said the 4-year-old daughter of Daredevil received a 30-day break following the Breeders’ Cup and is now in light training at new co-owner Mandy Pope’s farm in Florida.

“I think those are realistic goals,” Cox said. “We’ll get her back and probably ship her to the Fair Grounds and train her here and just kind of see how things go. I’m excited about hopefully taking a big swing at the Apple Blossom.”

Cox just missed sweeping Oaklawn’s series of two-turn stakes races for older fillies and mares in 2021. Cox won the $150,000 Pippin with Getridofwhatailesu, $250,000 Bayakoa (G3) with two-time Eclipse Award winner Monomoy Girl and the Azeri with Shedaresthedevil. Monomoy Girl, in what would be her final career start, was beaten a nose by Letruska in the Apple Blossom. The Apple Blossom is the final race in the series.

Letruska, also ticketed to run next year, is the front-runner for an Eclipse Award as the country’s top older dirt female of 2021. Shedaresthedevil won the $300,000 Honeybee Stakes (G3) for 3-year-old fillies in 2020 at Oaklawn before capturing the $1.25 million Kentucky Oaks (G1) later that year at Churchill Downs.

Flurry has owned a piece of Shedaresthedevil since November 2019.

A triple Friday vaulted Brad Cox into the lead in the trainer standings after Day 7 of the scheduled 66-day meeting. Cox won the fifth race with Mariah’s Fortune ($10.20), sixth race with In Dreams ($4.60) and the eighth race with favored Coach ($5), who was making her first start since the $1.25 million Kentucky Oaks (G1) for 3-year-old fillies last April at Churchill Downs. Florent Geroux rode Mariah’s Fortune and In Dreams, a 2-year-old filly and colt, respectively. Ricardo Santana Jr. was aboard Coach. Mariah’s Fortune, owned by prominent Arkansas automobile dealer Steve Landers, became the first Oaklawn winner sired by champion and 2017 Arkansas Derby winner Classic Empire. She broke her maiden by eight lengths at 1 1/16 miles. In Dreams, by Frosted, was a six-length entry-level allowance winner in the fastest 6 furlongs (1:09.61) run by a 2-year-old in Oaklawn history. Cox entered Saturday with six victories, one more than 11-time local leader Steve Asmussen. … Santana also had a triple Friday. In addition to Coach, Santana won the second race aboard favored Persisto ($3.20) for trainer Tom Amoss and the seventh race aboard favored Bourbon Frontier($4.80) for Hall of Fame trainer Jerry Hollendorfer. The triple moved Santana into sole possession of eighth place on Oaklawn’s all-time win list for jockeys with 620. Luis Quinonez (617) is No. 9. Santana has won eight Oaklawn riding titles. … Trainer Michael Hewitthad a bookend double Friday, winning the first race with Miss Allie Grace ($40.40) and the ninth and final race with Kat’s Hitman($11.60). Miss Allie Grace was the second career Oaklawn winner for Albert Lopez, 20, who became the fourth apprentice jockey with a victory at the 2021-2022 meet. Kat’s Hitman was the fourth winner at the meet for jockey Jon Court, 61, and his 703rd overall at Oaklawn.

Sign Up
The Pressbox · 10 minutes ago
@thepressboxlts
May I please get 2 followers to COPY and re-post this tweet?