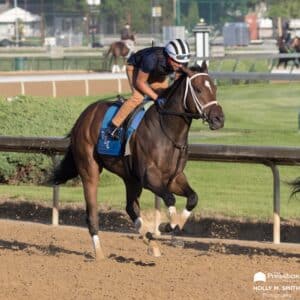 Caddo River Looks to Build on Last Race Heading into 2022

Officially, he wasn’t the winner. But, Caddo River accomplished something for the first time in his racing career Dec. 19 at Oaklawn, reaching the finish line first after not controlling a race on the front end.

Trainer Brad Cox said he hopes that performance is something Caddo River can build on during his 4-year-old campaign at the 2021-2022 Oaklawn meeting. Caddo River was a promising Kentucky Derby prospect last winter in Hot Springs after consecutive gate-to-wire blowout victories at a mile, including a record-setting 10 ¼-length score in the $150,000 Smarty Jones Stakes at Oaklawn.

After Caddo River was withdrawn from Kentucky Derby consideration because of a minor illness, Cox and breeder/owner John Ed Anthony of Hot Springs pulled the plug following the Hard Spun’s colt sixth-place finish in the $400,000 Woody Stephens Stakes (G1) June 5 at Belmont Park.

Caddo River resurfaced in the 1-mile allowance race late last month and had an eventful trip under regular rider Florent Geroux. Caddo River was rank early and bottled up in fifth along the inside on the second turn. Swung five-wide turning for home, Caddo River ran down Atoka to win by a neck in 1:38.28 over a fast track. But following a claim of foul by Luis Contreras, the rider of Atoka, and a stewards’ inquiry, Caddo River was disqualified and placed second for lugging in and bumping Atoka near the finish line, according to footnotes from the official race chart.

“Big race,” Cox said Thursday morning. “It was good to see him pass horses as opposed to going to the front and holding on. A talented horse. I thought it was an extremely good race off the layoff – passed some good horses. I think for him to be what we want him to be, a horse that can compete at the graded stake level, he’s going to have to be able to pass horses and relax a little bit. He didn’t relax as well as we would have liked to have seen him, but I think once he gets a couple of runs under him, hopefully, he’ll figure out that he’s going to have to shut it off early to have a little bit better closing kick.”

Although Caddo River has plenty of stakes experience – he also finished fifth in the $1 million Rebel Stakes (G2) and second in the $1 million Arkansas Derby (G1) last year at Oaklawn – Cox said another conditioned allowance “is probably the logical spot” for a second start off a long layoff.

“Trying to develop the horse and have a good winter with him and a good 2022, it probably makes the most sense,” Cox said.

About an hour before Caddo River was disqualified from his victory, half-sibling Como Square, won an entry-level allowance sprint for 2-year-old fillies.

“It’s really the logical spot moving forward, trying to stretch her a little bit,” Cox said. “She’s a half to Caddo, but she really doesn’t look anything like him physically. She’s real strong and stout, where he’s got a lot more leg and looks like a two-turn horse, where she looks like she might be a little limited on distance.”

Pangburn, a daughter of Congrats, was an allowance winner in 2015 at Oaklawn for Anthony and trainer Kenny McPeek. Pangburn then finished third in the $150,000 Honeybee Stakes (G3) and fourth in the $400,000 Fantasy Stakes (G3). The Honeybee and Fantasy are Oaklawn’s final two Kentucky Oaks points races.

Anthony boards Pangburn at famed Stone Farm in Kentucky. Pangburn also has a 2-year-old colt by champion Nyquist and is booked back to Hard Spun, said John Gasper, who is Anthony’s racing manager.

Secret Oath punched her ticket to the $200,000 Martha Washington Stakes Jan. 29 with a powerful 8 ¼-length victory in Friday’s featured eighth race, a 1-mile allowance for 2-year-old fillies. Secret Oath ($17.60) was exiting a fifth-place finish in the $400,000 Golden Rod Stakes (G2) Nov. 27 at Churchill Downs. Luis Contreras rode Secret Oath, from the first crop of the late champion Arrogate, for Hall of Fame trainer D. Wayne Lukas and the filly’s breeders, Robert and Stacy Mitchell (Briland Farm). Lukas and Briland also campaigned Secret Oath’s dam, multiple Oaklawn stakes winner Absinthe Minded, and her first two foals to reach the races, La Fee Verte and Sara Sea. La Fee Verte and Sara Sea also won at Oaklawn. Secret Oath’s winning time over a fast track was 1:37.38. The Martha Washington is Oaklawn’s first of three points races for the Kentucky Oaks, the nation’s biggest race for 3-year-old fillies. … Arrogate was represented by his first Oaklawn winner in Friday’s seventh race with 2-year-old Apprehend ($8), who broke his maiden by a nose at 6 furlongs under Florent Geroux. It was the second of three winners on the card for trainer Rene Amescua, an Oaklawn newcomer. Amescua also won the third race with I’m the Boss of Me ($8.60) and the ninth race with Melting Snow($25.80). Both of those winners were ridden by eight-time Oaklawn riding champion Ricardo Santana Jr. All three of Amescua’s winners were previously based in Southern California, where the trainer has raced extensively. … John Hiraldo notched his fifth winner of the meeting in Friday’s second race aboard Kantex ($10.60) for trainer Randy Morse and co-breeder/co-owner Randy Patterson. Kantex collected an addition $2,100 through Oaklawn’s Lasix-free Bonus Program (10 percent hike to the winner’s share of the purse for winning without the anti-bleeder medication). Hiraldo, 20, is a candidate for an Eclipse Award as the country’s top apprentice jockey of 2021 after finishing the year with 81 victories and $2,178,769 in purse earnings, according to Equibase, racing’s official data gathering organization. Hiraldo rides with a 5-pound weight allowance. … Chel-c Bailey, a 7-pound apprentice, recorded her fourth winner of the meet in Friday’s sixth race aboard Sturgill ($44.20) for co-owner/trainer John Haran.