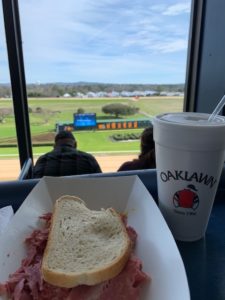 Oaklawn began a new tradition when it opened for a live race meet in December for the first time in its 117-year history. The track opened Dec. 3 and ran nine days before taking a break over the Christmas holiday and the initial results were very positive. Total handle for the nine days was $46,986,484, ranking Oaklawn third behind Gulfstream Park and Aqueduct, but ahead of other well-established December tracks.

“We were very pleased with our numbers in December,” General Manager Wayne Smith said. “Being this was our first opportunity to provide some of the best live racing in December, we couldn’t be happier. It was very exciting to pair live racing with other events such as the sold-out Martina McBride concert in our new Event Center. I’d like to take a moment to thank our equine athletes, owners, trainers and jockeys for their participation. Also, our fans and team for embracing these new dates.”

“This has been great,” Hall of Fame trainer D. Wayne Lukas said. “It’s just what we’ve been needing. With the type of purses here, the horsemen want to be here.”

Retired Hall of Fame jockey-turned-agent Gary Stevens selected Oaklawn as his winter base for himself and jockeys Giovani Franco and Tierra Pereira, who were previously based in California, because of the December dates.

“The December dates definitely played a factor in the decision to come here,” Stevens said. “It gave us a great way to prepare and get established for the season. Giovanni got off to good a start, which has helped me get some business for Tiago (who was scheduled to begin riding Jan. 1). The purses are great. This is the best place to race. We love it here.”

Jockey Jon Court is another Oaklawn regular who liked the earlier opening. Court, 61, won his first race at Oaklawn in 1981 and was its leading rider in 2000. He had four victories through Dec. 19 and has 703 overall to rank No. 6 in Oaklawn history.

“I’ve been enjoying it,” Court said. “It saved me some travel from having to go to the Fair Grounds and Turfway, so we got here and got settled in. Heck, I was able to buy some real estate, so everything’s looking good.”

Sign Up
The Pressbox · 57 minutes ago
@thepressboxlts
May I please get 2 followers to COPY and re-post this tweet?