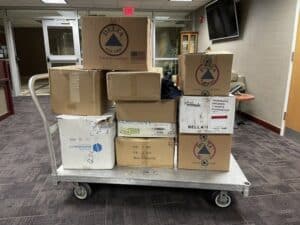 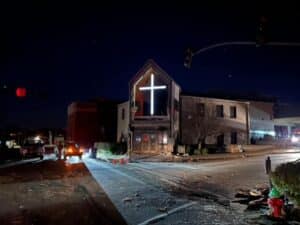 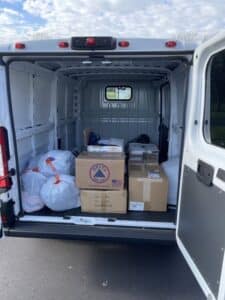 (Boxes and bags full of new clothes and other supplies gifted by Indiana Grand Racing & Casino, and its’ GM & President Eric Halstrom, were loaded into a panel van that was donated for the day by Clark Distributing, out of Versailles, KY, and driven by its’ GM Red Grange / Photos submitted)

On Monday, I was twirling through my Twitter account, as I often do, and I stumbled upon a message from my great friend and ally, Rachel McLaughlin, up at Indiana Grand Racing & Casino. Seems as if she was going to give away a very nice Indiana Grand jacket as part of her daily promotion for the track and its’  simulcasting program.

Normally, each day of the week, Rachel picks a track to handicap and some individual races, as well, to promote. It is part of her daily job. She takes to social media to highlight Indiana Grand and to help encourage racing fans to participate more often with the IGR products.

And, in order to do that, she has a give-away promotion to attract more attention and participation.

Well, she attracted me. Immediately.

And, she had my attention. From hello.

As soon as I saw the feed, I tweeted my request and asked Rachel and her employer if they had any more of those jackets — or anything else, for that matter — and if they would consider making a clothing donation to the victims of the horrific tornados that tore West Kentucky a new one last week.

If took only a minute before Rachel and Eric Halstrom, the wonderful General Manager of Indiana Grand Racing & Casino, to reply.

The follow-up twitter feed from Eric was one of the most positive things I had read and heard since the gut-wrenching tornado hit the little town of Mayfield and rendered nearly everything and everyone useless in its’ wake.

Please allow me to clarify, just a bit:

Eric Halstrom is one of the best people I have ever met. Period.

Eric Halstrom is one of the best friends one could ever have. Period.

Eric Halstrom is one of the most giving and thoughtful people on God’s Green Earth. Period.

True to his word, and in less than 24 hours, help was on its’ way from Shelbyville, Ind. to little Mayfield, KY.

Early Tuesday morning, Eric and his lovely finance, Kris, stayed home; organized and prepared boxes and bags of new clothes that the track had ordered and given away throughout its’ 2021 live race meet; and then made ready for a panel truck to arrive from Versailles, KY.

“Red just left. 10 boxes from Indiana Grand and three large bags filled with good Fall/Winter stuff that Kris and I put together. Hope this helps in a small way.”

With all due respect, Eric?

Not a small way, mind you.

This donation was huge.

And, it will be hugely beneficial when the clothes are distributed in the next day or so to those that desperately need them.

And, there is more to this story, too.

“Red,” by the way is Red Grange — another amazing friend and amazing person.

“Red,” on this day, was our version of Santa Claus. So appropriate that he is called “Red.” On this day, he was dressed just like the big man himself on Christmas Eve. If not on the outside, mind you, certainly on the inside.

You see, Red Grange manages the Clark Distributing Company’s facility in Versailles and is in charge of thousands of deliveries each day to retailers located throughout Central and East Kentucky. Those deliveries are packages of products brewed by Miller, Coors, Corona and many other suppliers of malt beverages.

He oversees one of the biggest logistics and deliver programs in the Commonwealth. Each day. Every day.

But, on this day — Tuesday, Dec. 14, 2021 — Red Grange manned the driver’s seat of the panel truck himself. And, this was to be a special delivery. Of special gifts. To a special group of people.

On this day — Tuesday, Dec. 14, 2021 — Red Grange woke and left Versailles for the 4 hour trip to pick up the donation from Eric and Kris.

The man could have been in Tampa, Fla.

The man could have been in Hilton Head, S.C.

The man could have been on some beach, somewhere.

But this man — our Santa — was right where we needed him to be.

And, right where he wanted to be, too.

It is amazing what people will do when you ask for their help.

It is truly amazing what friends will do when they know that people are hurting and are in desperate need of their assistance.

On Tuesday, the world needed Eric Halstrom and Red Grange.

On Tuesday, the people of Mayfield, KY needed Eric Halstrom and Red Grange.

So, so, so desperately.

Without asking for anything in return.

Not even a mention of their name.

Not even a salute or recognition of their tremendous donations of both time and energy.

On Tuesday, the world and the people of Mayfield found both Eric Halstrom and Red Grange, two people they will never meet in person, in all probability, but two people who will undoubtedly touch their lives.

On Tuesday, the world and the people of Mayfield discovered the generosity of two people they will never be able to personally thank or shake their respective hands, but two people who undoubtedly will touch their souls.

On Tuesday, the world and the people of Mayfield — who have lost so very much — found two missionaries; two angels flying too close to the ground; two disciples who still believe in the “Golden Rule.”

On Tuesday, the world and the people of Mayfield were given much — clothes to warm the body, to be sure; but love to warm the heart.

On Tuesday, the world and the people of Mayfield discovered two living examples of what Christmas is all about.

On Tuesday, the world and the people of Mayfield got something that no wind can ever blow away.

On Tuesday, the world and the people of Mayfield got two living candles that no tornado can blow out.

On Tuesday, the world and the people of Mayfield received a Christmas miracle.

Let there be Christmas.