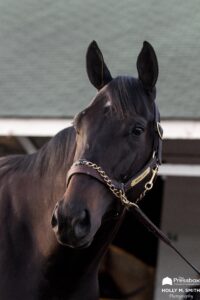 Medina Spirit — one of the most star-crossed horses of any generation — has died following a workout at Santa Anita Park this morning, according to multiple reports including a confirmation from owner Amr Sedan to the “Thoroughbred Daily News” and attorney Craig Robertson III to Lexington television broadcaster Dave Baker.

Some are already reporting that the cause of death is from an apparent heart attack. But that final conclusion and determination can only be made after an extensive autopsy that should be performed by professionals connected and responsible to the California Horse Racing Board and under the supervision of the state veterinarian’s office.

At this time, no one knows when that process will take place, or if it is in the process now.

Medina Spirit has been the center of a boiling controversy ever since the 3-year-old colt’s surprising victory in this year’s Kentucky Derby at Churchill Downs. The celebration did not last long, though, when it was later discovered that the colt had tested positive for a drug overage on race day.

Despite the rants and many denials of Medina Spirt’s embattled trainer — Bob Baffert — the colt’s victory was officially stayed until a full investigation into the matter was undertaken by the Kentucky Horse Racing Commission and the multiple tests of the horse’s blood and urine were conducted.

According to officials, both the original blood test and the subsequent split sample of the same determined that the horse did, in fact, perform in the Kentucky Derby with a drug overage that exceeded permitted limits.

Soon afterwards, Baffert’s attorney filed a motion in Kentucky courts seeking another round of testing that would examine the horse’s urine — which was collected post-race — from that day. The legal defense team contended that the drug in question was not administered through an injection and not into a joint, but, was instead, the result of a cream that was being utilized to treat a skin rash on the rear of the horse. That treatment was administered before and leading up to the Kentucky Derby, and, apparently, contained some of the prohibitive substance.

The full matter has been so controversial, in fact, that the urine had to be flown to a New York testing lab with representatives of both the Commission and the trainer.

Meanwhile, Baffert was ruled off the grounds of Churchill Downs and was later banned by the track from entering any horse for the next two years. The New York Racing Association took similar actions, but their ban was overturned in a New York Court after being contested by Baffert’s attorneys.

Coincidentally, Robertson just released a press statement late on Friday that contended that the split urine sample from Medina Spirit had been completed by Dr. George Maylin, Director of the New York Drug Testing & Research Program. Robertson also went on to say that the test results showed “…definitively confirmed that the betamethasone present in Medina Spirit’s system did indeed come from r the topical ointment OTOMAX and not an injection.”

Despite Robertson’s claims on Friday, though, the official report — in its’ entirety — has not been released and no one from the testing lab had made a public comment, at this point, to either confirm or deny Robertson’s claims.

A spokesperson for the Kentucky Horse Racing Commission could not comment on the press release on Friday. “We do not comment regarding on-going ligation.”

Now, on Monday, just 21/2 days after the so-called “exoneration,” the colt has perished at his home base and track — Santa Anita, which has had its’ own share of controversy over the past few years in terms of unexpected and tragic horse deaths, both on and off the racetrack.

It will take some time to determine the cause of Medina Spirits death, and for the CHRB to do its’ complete and thorough report, to be sure. But heart attacks do occur in horses, and have claimed the lives of a few high-profile individuals in the past.

One of the most notable horses that may have suffered a similar condition and result was Swale, whom pathologists discovered evidence indicating that he may have died of heart failure in 1984. Swale — a 3YO at the time — had won both the Kentucky Derby and Belmont Stakes, two of the three legs of the Triple Crown.

A statement was issued by the New Bolton Center of the University of Pennsylvania’s School of Veterinary Science, where tests had been run on samples and organs from Swale’s body. The scientists there determined that an area of fibrosis on his heart had been discovered.

In the statement, it was reported that Dr. Helen Acland, the center’s head pathologist, had “…found a very small area of fibrosis” below the aortic value and that “…lesions of this type can produce an arrhythmia in the heart, which can be fatal.”

Dr. Peter Mann, a senior pathologist at the center, said, at that time, “We can’t say, ‘Yes, this killed Swale,’ but it’s possible.”

Dr. Mann went on to say that there was no way to more conclusively prove what killed the colt, who died suddenly and mysteriously after a morning workout at Belmont Park on June 17, 1984 — just a few days after the Belmont Stakes.

It will be interesting to see what the science reveals in the case of Medina Spirit. But, any way you look at it, this is a very sad ending to a very sad year for the horse, itself.