Opinion: Where Do Great Friends Come From? Just Be Ready When They Walk Through the Door & Into Your Life

Opinion: Where Do Great Friends Come From? Just Be Ready When They Walk Through the Door & Into Your Life 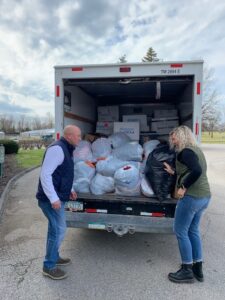 In nearly every single measurement that many — if not most — weigh as the definitions for “successful?”

Well, my grandfather came up short.

Ira B. McLean stood about 5-foot-3, at his tallest. He weighed in at about 100 pounds at his heaviest. He earned every single dollar he ever made the hard way, with lots of hours of sweat and strain. He was orphaned as a young boy, and worked for his room and board.

And, as the story goes, a group of other boys once tied my grandpa to a wagon wheel on his way home from school one day so that this girl, who would one day become my grandmother, would discover and meet the boy who had a crush on her.

Fortunately, she untied him from the wheel, and fortunately my grandfather tied the knot a little bit later.

A lot later in life, and after his retirement, he was mowing his hilly front lawn on what was one of the first riding mowers ever created. For some reason, God only knows, my grandfather took a quick turn that turned into a wrong move. He fell. The mower fell, too. Right on top of his left leg. The mower won.

For over 21/2 hours, my grandfather laid in 90-degree sun, waiting for someone to find him. Luckily, for me, someone did. The doctors had to amputate his leg, just above the knee. And, they asked us to pray that the gangrene didn’t take his life.

I prayed like I had never prayed before. And, while God couldn’t save his leg, I thought he saved his life.

On the first day he was released from the hospital, my grandfather went home. Fitted with a crude prosthetic, he limped his way out to the barn that sat on the hill behind his house. He found the piece of tin that served as his mower, and he pulled it out; turned it on its’ side; and he cleaned out the blade. The same blade that was still covered with his blood and part of his leg. And, he climbed aboard.

After all, the yard needed to be trimmed. And, the man trimmed it.

Such was my grandfather’s life.

Not an easy one, mind you. Not by any standard.

You could ask anyone who ever came in contact with my grandfather, and universally they will tell you the same things.

He was tough as they come. Corn cob tough.

He was true to his word. What he said, he meant. He certainly meant everything he said.

Back in 1974, on a day where the clouds turned angry and the sky turned ugly, a horrific tornado cut through Central Kentucky. It cut its’ path directly over and through Jett, a little town on the outskirts of Frankfort. It drove its’ way through Woodlake, a little country town that couldn’t even afford a grocery. It churned right through my grandfather’s house, and a man who couldn’t even afford running water or a sewer system.

When my father and I finally arrived on the scene, we found my grandfather and grandmother hunkered in the earthen cellar — under what used to be the only house that they ever owned. We found them shaken, but not stirred. We found them alive, but not even a little broken.

It was the only time I ever saw my grandfather cry.

And, it was a single tear. Or, at the most, two. They both inched their way down his cheek and onto the same ground that he had lived for much of his life.

Then, he shook his head and spoke words that I could not imagine hearing, and words that I will never, ever forget.

“When do you think we can get her rebuilt,” he said to my dad. “Got any time tomorrow?”

We had time. We made time.

Within 24 hours, my dad — along with his brothers and my grandpa’s neighbors — started clearing the debris, and burning the ruins. We started collecting whatever could be saved, which was not much. We started what needed starting. We got rid of what needed finishing.

It was only a few days later when we looked up and a group of Mennoites showed up in front of what used to be my grandparents house, which now resembled a pile of toothpicks.

They unloaded out of a couple of trucks, that looked as if they were on their last legs. And, they asked if we needed some help.

We must have looked as if we did, because they didn’t wait for an answer.

I just remember one of the men asking to speak to my grandfather. Alone.

I just remember one of the men, who must have been the head of the little clan, asking for a photo of the house, as it used to be. Just one.

I just remember that for the next week, that group of men never missed a day or an hour. They rebuilt my grandfather’s house. Really, from the ground up.

And, as quickly as the men had come, I just remember that they were gone. With the wind.

One afternoon, just after the Mennonites had left, and as we sat on that front porch, I asked my grandfather a simple question that turned into a very complex answer that neither he nor I expected. I asked:

“PawPaw, where do you think those men came from?” I asked.

He looked at me, deadpan as always, as returned my question with a question.

“Where do you think they came from?” he asked back.”

I said, “Well, I’m told that they came from somewhere in Indiana. Is that right?”

PawPaw quickly responded. “Well, is that what they call Heaven these days?”

I looked at him and he smiled a smile that really wasn’t a smile, if you know what I mean. And, I think I knew what he was talking about. Then. And, even better, now.

Ever since the devastating and horrific tornado tore Mayfield a new one, I have reached out to some friends and asked for their assistance. One of the first was Eric Holstrom, the General Manager and head of Indiana Grand Racing & Casino. I asked for anything that could give. Clothes. Gift cards. Hats. Tee-shirts. Sweat shirts. Anything.

Within 24 hours, Eric had a load ready for pickup in little Shelbyville, Ind. We sent a panel truck from Clark Distributing and Red Grange spent 18 hours driving the gifts of love to a worn and torn Mayfield and the people that the tornado had left behind. Penniless. Shirtless. Hopeless.

About every other day, I get another text or email from Eric and/or his fiancé, the lovely Kris Bartusek.

They want to know how my beautiful wife, Leigh Ann, who is from Mayfield, is doing. How she is holding up. How she is managing.

They want to know what they can do.

On New Year’s Eve, Eric Halstrom — the General Manager, now — and his fiancé, the beautiful Kris, rented a U-Haul truck and drove from Indianapolis to Lexington with a big haul of clothes, hats, coats, outer wear, and other essentials like toothpaste, brushes, and tooth brushes.

We unloaded over 50 boxes full of new things.

We unloaded over 12 huge bags of other things.

We unloaded until we could unload no more.

They offered the gifts of necessities to whomever needed them the most. Backside workers in Lexington. Back to their back people in Mayfield. They donated love.

As they got ready to get back in the truck and head off, to Clarksville to check on the OTB that Eric also manages and then, ultimately, back to the racetrack and casino, where the two of them will work a party to well after midnight, I remembered that conversation with my grandfather.

And, I teared up.

“Where do these people come from,” I asked myself.

They would say from Indiana, and that would be true.

But then I would have to say:

“Is that what they call Heaven these days?”

I love them so much.

“Angels flying too close to the ground.”

That’s the way more people should be. 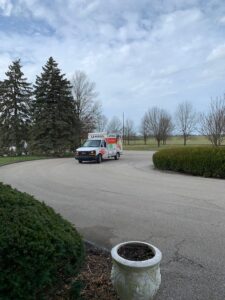 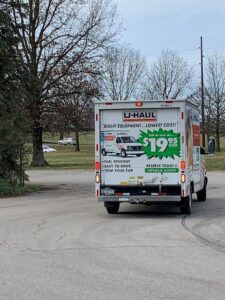 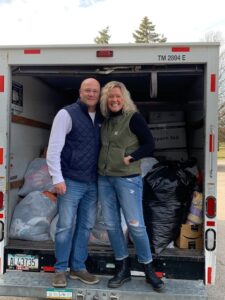 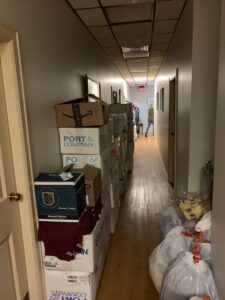 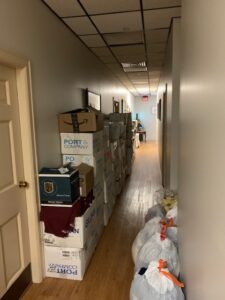 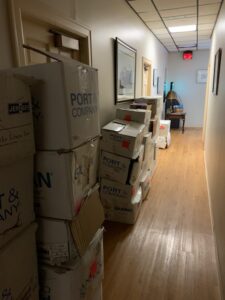 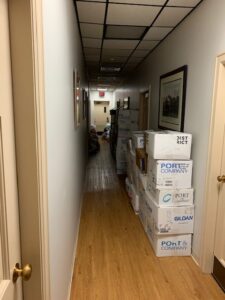 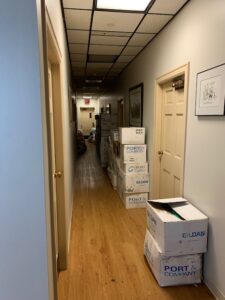