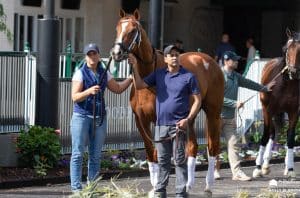 There are no changes from the first two invitation lists for the 7th running of the 1 1/8-mile stakes for older horses that headlines a program of eight stakes, seven graded, worth $5.3 million in purses including the $1 million Pegasus World Cup Turf Invitational (G1) presented by Qatar Racing and $500,000 TAA Pegasus Filly & Mare Turf Invitational (G3) presented by Pepsi.

Post positions will be drawn between Gulfstream’s live races Sunday, Jan. 22 and be broadcast at PegasusWorldCup.com and Facebook.com/PegasusWorldCup.

Gold Square’s Cyberknife, a multiple Grade 1-winning son of 2018 Pegasus World Cup champion Gun Runner, was one of the most successful 3-year-olds in 2022, winning the Arkansas Derby (G1) and Haskell Invitational (G1) and finishing second in the Breeders’ Cup Dirt Mile (G1), beaten a head by Cody’s Wish.

Scheduled to make his final career start in the Pegasus before embarking on a stallion career, Cyberknife is trained by Brad Cox, who saddled Knicks Go for a victory in the 2021 Pegasus World Cup prior to the 2021 Horse of the Year’s runner-up finish last year behind Life Is Good.

Hall of Famer Bob Baffert, who saddled Arrogate for a Pegasus World Cup triumph in 2017, trains Karl Watson, Michael Pegram and Paul Weitman’s Defunded, a 4-year-old gelded son of Dialed In that closed out the 2022 season with victories in the Awesome Again (G1) and Native Diver (G3). Godolphin’s Proxy, trained by Michael Stidham, is a 5-year-old homebred son of Tapit that earned Grade 1 credentials in the Clark (G1) at Churchill Downs, his 2022 finale.

Get Her Number won the American Pharoah (G1) in 2020 and was twice Grade 1-placed in 2022 including a second in the Cigar Mile, a half-length ahead of White Abarrio. Art Collector won the 2021 Woodward (G1) and successfully defended his Charles Town Classic (G2) title in 2022. Like O’Connor, Super Corinto parlayed a Group 1 victory in Chile into wins at Gulfstream.

California Racing Partners, Ciaglia Racing and Ryan Hanson’s One More Bid, last out winner of the Mathis Mile (G2) Dec. 26 at Santa Anita, was added to the main invitation list for the Pegasus Turf following the defection of Grade 1 winner In Love, the only changes in the top 12.

Two-time defending champion Colonel Liam continues to top invitees to the Pegasus Turf. Robert and Lawana Low’s 6-year-old finished sixth in the Dec. 31 Fort Lauderdale (G2) at Gulfstream, his first race in 281 days. He is joined by City Man and Grade 1 winner Decorated Invader, respectively 1-2 in the Fort Lauderdale for trainer Christophe Clement.

Jordan Wycoff’s Atone has placed four times in graded-stakes including the 2021 Fort Lauderdale and most recently the Mint Million (G3) last fall at Kentucky Downs. He ran fourth behind Colonel Liam, beaten 1 ¾ lengths, in the 2022 Pegasus Turf. Trainer Mike Maker won the Pegasus Turf with Zulu Alpha in 2020.

Charles Fipke’s Lady Speightspeare is the lone female on the invitation list. The 5-year-old Speightstown mare owns four career graded-stakes wins – the 2020 Natalma (G1) and 2022 Nassau (G2), Trillium (G3) and Seaway (G3), all at Woodbine. She exits a third in the Breeders’ Cup Filly & Mare Turf (G1) Nov. 5 at Keeneland.

Team Valor et. al’s Hurricane Dream has been group-stakes placed four times in Europe that has yet to race in the U.S. He was beaten a head when second in the one-mile Brunner Oettingen Rennen (G2) last September in Germany.

Trevor Harris’ Sweet Enough was elevated from the reserve list. Trained by Hall of Famer Roger Attfield, Sweet Enough won three times in her native England before coming to the U.S., where she capped 2022 with an optional claiming allowance victory going 1 1/16 miles Dec. 29 at Gulfstream.

British-bred Lady Rockstar, by Frankel, was second by a length in the Suwannee River. Perseverancia exits a runner-up finish to Dalika in the Nov. 24 Cardinal (G3) while Scotish Star, third in the Chillingworth (G3) on dirt at Santa Anita last fall, finished sixth as the favorite in the Suwannee River.

Bridlewood Farm’s multiple stakes winner Bay Storm captured the Incredible Revenge last summer at Monmouth Park and ended her 2022 season running second by a nose in the Mint Ladies Sprint (G3) at Kentucky Downs and third after setting the pace in the one-mile Suwannee River.

Artie’s Princess, Dalika, Justify My Love, Queen Goddess, Shantisara and Wakanaka remain from the initial list. Shantisara earned Grade 1 credentials while winning the 2021 Queen Elizabeth II Stakes at Keeneland and is trained by Chad Brown, who saddled Regal Glory for a victory in the 2022 Pegasus World Cup Filly & Mare Turf.

Wakanaka, who is trained by Hall of Famer Bill Mott, captured the Fall Harvest to conclude a productive 2022 season that included a victory in the Dance Smartly (G2) at Woodbine and a runner-up finish behind Regal Glory in the Just a Game (G1) at Belmont. Al Stall Jr.-trained Dalika, a hard-hitting 7-year-old daughter of Pastorius, earned Grade 1 credentials with a victory in the Beverly D. (G1) at Churchill Downs in August and also won the Ladies Turf (G3) at Kentucky Downs and the Cardinal (G3) at Churchill.

2021 American Oaks (G1) and 2022 Santa Ana (G3) and Robert J. Frankel (G3) winner Queen Goddess is trained by Michael McCarthy, who saddled City of Light for a victory in the 2019 Pegasus World Cup. Artie’s Princess won the Presque Isle Masters (G2) for defending Championship Meet leading trainer Saffie Joseph Jr., while Justify My Love is a Brazilian-bred Group 2 winner in Argentina that hails from the same connections as Ivar.