PERSPECTIVES: Enough is Enough. Time For a “Feel Good Story” That Warms The Heart, Restores the Soul, Gives Us Hope — Again

PERSPECTIVES: Enough is Enough. Time For a “Feel Good Story” That Warms The Heart, Restores the Soul, Gives Us Hope — Again

(The Player, the jockey Calvin Borel, and the owner/trainer Buff Bradley)

It’s been a tough week. Already. And, we are just now to hump day.

It’s just been an awful, nasty, gut-wrenching time to be a Thoroughbred horse and racing fan. Especially if you lead with your heart. Right?

Well, let’s take a little break, why don’t we. Just for a minute or two.

Let’s let a little sunshine spray into our hearts and minds. Just for a second or so.

Let’s remind ourselves really why we all love this game and this life so very much. Even if it is so difficult on the soul, from time to time. Even if it is for a flicker in time. 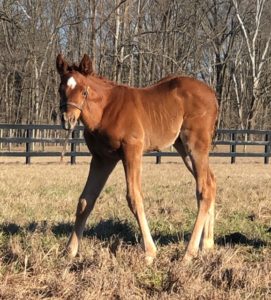 (The little colt by The Player)

Just a couple of days ago, my great friend and trainer Buff Bradley sent me a couple of photos of a baby colt that was just born and released into the paddock for the first time. The colt is a son of his most favorite horse of all time — The Player, a beautiful, red-headed chestnut who now stands as a stallion as Pope McLean’s Crestwood Farm in Lexington.

If there is a “feel good story” in the Thoroughbred industry over the past couple of years, it is surely The Story of The Player, a horse bred, trained and raced by Buff and his dad’s best friend Carl Hurst.

And, truth be known, a stranger never met a stranger, more personable horse, either.

The Player, from his early childhood, was prone to antics that boggled the mind, and captured the heart of hearts.

Often, you would catch him sitting in the paddock. Sitting. Just like a dog would sit on his back haunches.

Sometimes, when Buff tried to bush-hog the paddock, the young colt would mosey over to the tractor and attempt to climb up in the cockpit with his boss. I guess the colt thought if Buff can drive a tractor, then he could, too.

Nearly every morning, when Buff came to the barn, The Player had wiggled himself out under his webbing and into the shed row to sleep. It became such a habit that Buff finally just purchase a pillow for the colt to rest his head on.

On top of that, The Player could run, too. Fast. Furious. And, very well. And, guess what? Without any performance-enhancing drugs. Imagine that, Jason and Jorge. There are still a lot of good people and good horses that can do it the ole’ fashion way. On guts and grind. Talent and drive. With love and hugs.

The Player won Stakes at Keeneland and Churchill Downs. Won another, too, at the Fair Grounds. Each time the colt returned to the winner’s circle wearing a smile about as big as the one on Buff’s face.

They were The Team.

Until one unfortunate day at the Fair Grounds when The Player took a bad step in the middle of making his patent speed move and in the middle of the final turn. He shattered his sesamoid so badly that no one ever dreamed he could stand again, must less recover.

And, he convinced the doctors to give the horse a chance. The on-track vets stabilized the leg and Buff began making phone calls. Finally, he found a surgeon at LSU willing to try to perform surgery; install a couple of plates and insert more than 2 dozen screws.

(Buff and The Player at LSU)

You see, Buff believed. And, in the end, so did The Player.

The surgery and subsequent surgeries took their toll. The recovery had many ups and downs. There were some good days full of good news. There were some tough days when decisions had to be made. Often, Buff would jump in his truck and drive to Baton Rouge just to spend a little time with his best friend.

It took over a year for the colt to recover enough that he could leave LSU and come home. It was a day of celebration and joy.

(The Player and our own Holly M. Smith at home in Frankfort)

After getting the colt back to his home and farm in Frankfort, Buff began to wonder what The Player could do next. Could he become a stallion? Seriously?

This winter and spring, the first foals by The Player have started to hit the ground.

And, they have hit the ground running.

Each and every one of them, a little bundle of miracle. 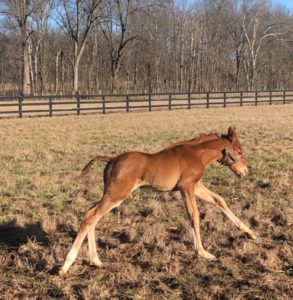 (I know we have shown these already. But I love the photos so much, I’m using them again. A colt by The Player, who is owned by Buff Bradley)

Only time will tell how good the sons and daughters of The Player will turn out to be.

But on this day — and in this week — I already know that the story of each and every one of them is a miracle come true and the best story that the horse industry can remember; can cheer the heart; can restore the soul; can give us hope; that we can tell and re-tell.

Despite all things that fracture this industry, we can heal. The Player did.

Despite all things that hurt our hearts and souls, we can overcome. The Player did.

Despite all the things that the gross, disgusting, putrid cheaters try to do to steal wins, and, more importantly, steal our dreams of owning the next winner of the Kentucky Derby, or our next Champion, or our next horse like The Player? We will survive.

After all, The Player did.

And, if that magnificent, personable, character can?

We just have to believe in doing right. Just like my friend Buff Bradley did. He did right by his horse. By his friend. By the game and sport he loves.

A long, long time ago, my great friend James E. “Ted” Bassett gave me a great piece of advice and counsel on a particularly tough day for me and a sad time in my life.

Mr. Bassett put his arm around my shoulders and said:

“Nobody ever went wrong taking the high road and doing the right thing.”

The gift of that sentence took a long time to truly sink in through my tough skin and harder head. But when it did? Glory hallelujah. It was my Damascus Road experience.

For every cheater, there is a Buff Bradley. Good people who do good things.

For every disgusting drug pusher, there is a Tom Amoss. Good people who do good things.

For every penny-sucking veterinarian that attempts to do more harm than good by administering horrific drugs into unsuspecting horses, there is a Stephen Lyster; and a Michelle Hanley Lovell; and a Norm Casse; and a Bret Calhoun; and a Shug McGaughey; and a Dale Romans; and so many, many, many more. All very good people doing good things for the right reasons.

In fact, there are many more good people in our sport than bad. Many, many, many more. I truly believe that. And, if I didn’t, I wouldn’t be doing what I am doing.

And, especially right now in time, I now truly believe that we all can’t go wrong by taking the high road and doing the right thing.

By our family members.

The Player, if he could, would tell you so, too.

And, if any horse could ever talk, other than Mr. Ed? It would be him. The Player.