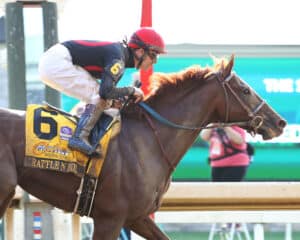 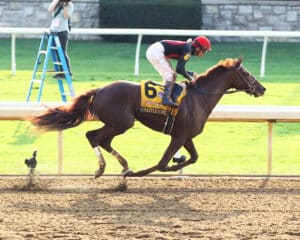 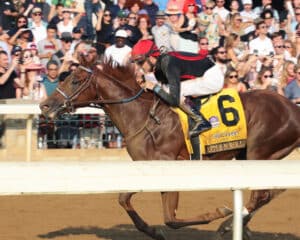 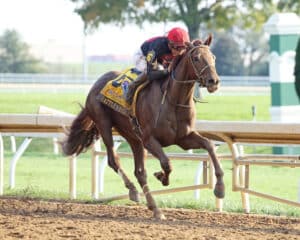 “He made a start at Churchill in the spring and it was more of a test drive than anything, trying to teach him to finish and everything. The race at Saratoga – we were miffed by that. His left eye was closed the next morning and the only thing we could figure is that he got hit in the eye with a rock or something. So we were like, ‘OK, that was a head-scratcher, what was that about?’ and then we went back to work. He’s never done anything (like that) before or since.

“I’m just real happy for the Mackin family. I love having the opportunity to be able to buy horses for people like them. You can’t go into a race with 13 horses and be overconfident, because so much can happen, and I told my wife before the race, ‘If the 13 horse rolls out of there early I think we’ve got a real chance,’ because that horse really needed to rate to win, and I think it set up well for us.”

“All the credit really goes to the horse, being only his fourth start, to be able to sit back there and read the race and let it develop in front of him. When I got him outside, he showed what a good horse he is. He engulfed those horses pretty easily, and turning for home he switched leads. He knows his job and he just kind of went on about it.”

“The one hole again didn’t help us (third time in five starts). He took too much time in the gate. I followed the winner all the way, but had to work very hard. He’s a nice horse. He just got tired.”

“We broke clean. We knew he had speed, but we also know there were other horses who had speed. He made the lead and relaxed very well. When we got to the second turn, he got a little lost on me. I mean with his first time going two turns he was kind of wondering what was going on. With 13 horses, if you want to win you have to run. We knew he was going to be a little hot, especially coming out of the 13 (post), but he broke very good and that was the point so I decided to go on.”

“We were committed from the outside post – we had to get across. First quarter and half were a little bit quick for a second-time starter going two turns, and it taxed him in the end. We learned a little more about him so we will regroup and go from there. We’ll let the dust settle and see how he comes back but I wouldn’t think (the Breeders’ Cup) is off the table.”