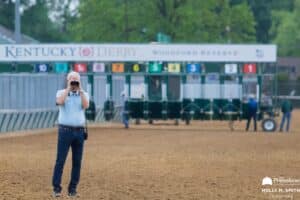 Hall of Fame trainer Todd Pletcher will send out graded-stakes placed Gambling Girl and maiden winner Aniston in pursuit of his sixth score in Saturday’s $100,000 Busanda, a nine-furlong test for sophomore fillies at Aqueduct Racetrack.

The Busanda is a qualifying event for the Grade 1 Kentucky Oaks on May 5 at Churchill Downs, offering 20-8-6-4-2 points to the top-five finishers. Pletcher captured the Busanda-Kentucky Oaks double in 2013 with King of Prussia Stable’s Princess of Sylmar, who upset subsequent Hall of Famer Beholder in that year’s Oaks by a half-length. Pletcher’s other Busanda scores came with Always Shopping [2019], Overprepared [2015], Fierce Boots [2014] and Dance Quietly [2011].

Spendthrift Farm’s Aniston enters her stakes debut off a second-out graduation on November 25 at the Big A in her first start contesting two turns. Although never a factor in her September 18 debut going a one-turn mile at Belmont at the Big A, the daughter of Curlin showed quite the turnaround next out when saving ground a close third-to-fourth down the backstretch and slid up the rail passing the quarter pole to draw away a 4 3/4-length winner.

“She’s trained well and shown some talent,” said Pletcher’s Belmont-based assistant Byron Hughes. “She’s a big scopey filly and it seems like she wants to run all day. That’s our mindset with her and she’s proved us right so far.”

Ned Toffey, general manager of Spendthrift Farm, credited Pletcher’s patient handling of Aniston, who he said has come along similarly to other Curlin progeny.

“Todd feels that she’s kind of a typical Curlin and he has done a really nice job of taking his time and understanding what she is, what she needs and what will suit her,” Toffey said. “He’s put us in a good position to begin to take advantage of the races that do suit her instead of trying to force her to be something she’s not. I think the two turns is a big part of it, but I also think it was time and maturity.”

“Sire power, pedigree and looks,” said Toffey when asked of Aniston’s appeal at the sale. “Usually, it’s some combination of those three qualities and she very much has the look of a quality filly. When you see a nice Curlin, chances are you’ll have to pay a bit for it.”

Aniston will leave from the outermost post 5 under Jose Lezcano.

Pletcher also sends out Repole Stable’s New York-bred Gambling Girl, who enters from a third-place finish in the nine-furlong Grade 2 Demoiselle on December 3 here in her open-company and two-turn debut.

Bred by Gallagher’s Stud, the daughter of Dialed In made the third time the charm with an emphatic 10 1/2-length score going seven furlongs on August 24 at Saratoga Race Course before capturing her stakes debut in the Joseph A. Gimma four weeks later at Belmont at the Big A.

Bringing up the rear in seventh down the backstretch of the Demoiselle, she launched her bid from the center of the racetrack in upper stretch but was unable to stave off outside rallies from stablemate Julia Shining and fellow Busanda aspirant Affirmative Lady. The effort also earned Gambling Girl three points on the Kentucky Oaks leaderboard, where she is currently No. 23.

Gambling Girl and Aniston have been workmates over the Belmont training track, most recently logging respective half-mile moves in 49.65 seconds on January 7.

“They’re pretty much on even terms in the morning,” Hughes said. “They’re both very easy to train, laid back and they’ll do whatever you ask them. Very straightforward.”

Gambling Girl was bought for $200,000 at the 2021 Fasig-Tipton Saratoga Preferred New York-bred Yearling Sale. She is out of the three-time winning Empire Maker mare Tulipmania, whose second dam, Felicita, produced multiple Grade 1-winner and 2014 Broodmare of the Year Take Charge Lady.

Despite being the lone maiden in the field, AMO Racing USA’s Affirmative Lady is sure to garner plenty of attention following a narrow runner-up finish in the Demoiselle for trainer Graham Motion. The gray or roan daughter of Arrogate was a respective third and fourth when sprinting against maiden special weight company this fall at Keeneland before making her two-turn debut in the Demoiselle.

Affirmative Lady raced in the clear from fifth while five-wide down the backstretch before launching her bid around the far turn. She established command at the stretch call, but finished a neck behind Julia Shining. She earned four points towards the Kentucky Oaks from her Demoiselle effort, sitting at No. 19 on the leaderboard.

Motion cited the Demoiselle’s nine-furlong distance as one reason he opted to run Affirmative Lady in that race as a maiden and said she is a true two-turn horse.

“It was a combination of the race coming up a relatively small field and the opportunity to get black type thinking this is what she really wants to do. You don’t get many opportunities to run a mile and an eighth except in these kinds of races,” Motion said. “In a perfect world, I would have liked to have run her in a maiden race but there hasn’t been a good opportunity. I’d love to get her maiden broken but I wouldn’t mind doing it in a stake. She certainly was competitive last time. I had the attitude that if we got a maiden race to fill, great. But if not, we were happy to come back in here.”

Four-time Eclipse Award-winning trainer Chad Brown, who captured the 2021 Busanda with The Grass Is Blue, will seek his second conquest when sending out maiden winner Occult for Alpha Delta Stables.

The dark bay or brown daughter of perennial leading North American sire Into Mischief was a distant fourth going six furlongs on debut in September at Belmont at the Big A, but returned a winner three months later at a one-turn mile over the same oval.

She stalked the pace a close fourth in between horses before making a three-wide move and taking control around the far turn en route to a 4 1/4-length victory, garnering a field best 72 Beyer Speed Figure.

Occult, out of the graded stakes-winning Empire Maker mare Magical Feeling, was bought for $625,000 at the 2021 Keeneland September Yearling Sale.

Completing the field is R.A. Hill Stable’s Sweetest Princess [post 4, Eric Cancel], who made her main track debut a winning one last out on November 18 at Aqueduct.

Trained by George Weaver, the New York-bred daughter of Cairo Prince cut back to a one-turn mile from going a two-turn 1 1/16-mile distance in her previous three starts. She was more prominently placed in her maiden victory, where she was a close fourth early on before drawing away to a 2 1/4-length score.

Sweetest Princess sported blinkers in her last two starts, which also included a runner-up effort to eventual stakes-placed Smokie Eyes on October 8 at Belmont at the Big A.

“Blinkers have helped her and she ran excellent,” said Weaver’s Belmont-based assistant Blair Golen. “She’s always breezed well on the dirt and she does everything correct. I think she caught the right field, got up on the lead and just kept confidence and kept going.”

Bred by Fred W. Hertrich III and John D. Fielding, Sweetest Princess was bought for $60,000 at the 2021 Saratoga Preferred New York-bred Yearling Sale. She is the first progeny out of the Giant’s Causeway mare Sweet Cause.

The Pressbox8 hours ago
New post added at The Pressbox - McLean's Selections for Turfway Park on Friday, Jan. 27

The Pressbox11 hours ago
New post added at The Pressbox - Work Tab for Thursday, Jan. 26: Binoculars Focused On Elite Power, Teena Ella & Other "Horses to Watch"