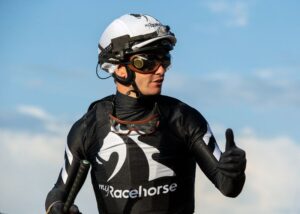 With Southern California kingpin Flavien Prat heading the charge, a full complement of world class jockeys is set to compete throughout the course of Santa Anita’s upcoming 16-day Autumn Meet, which is set to open on Friday, Oct. 1.  A total of four stakes, three of them Breeders’ Cup “Win & You’re In” Challenge Race qualifiers, will headline a nine-race program, with first post time at 1 p.m.

Prat, a 29-year-old native of Malun, France, is enjoying yet another tremendous year, having just won the riding title at the recently concluded Del Mar Summer Race Meet.  Although based in Southern California, Prat has ridden in major stakes throughout the country in 2021 and he currently ranks fourth among North American jockeys with earnings of more than $16.8 million.

“Jersey Joe” Bravo, who relocated to Southern California this past summer, enjoyed a solid summer at Del Mar, finishing fifth in the standings, and he adds considerable depth to a strong jockey colony.  Regarded as California’s best “gate rider,” Edwin Maldonado is enjoying perhaps the best year of his career and he figures to have plenty of live mounts throughout the 16-day stand.

A great deal of anticipation surrounds next Friday’s Grade II, $200,000 Eddie D Stakes, named in honor of retired Hall of Fame jockey Eddie Delahoussaye, as it marks a return to Santa Anita’s Camino Real Hillside Turf Course.  For 3-year-olds and up, the Eddie D will be contested at about 6 ½ furlongs and will likely attract a full field of 10 or 12 runners.

Three Breeders’ Cup “Win & You’re In” stakes, the Grade I, $300,000 American Pharoah, the Grade II, $200,000 Chandelier and the $100,000 Speakeasy will provide their respective winners with fees-paid berths in corresponding stakes over the two-day Breeders’ Cup World Championships at Del Mar Nov. 5 & 6.