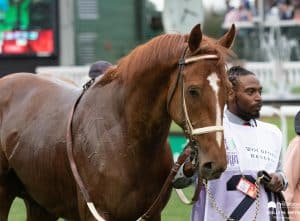 According to a news report on Thursday, the connections of Rich Strike — the shocking winner of the 148th Kentucky Derby — have decided to skip the second jewell of the Triple Crown and not ship to Pimlico for the upcoming Preakness Stakes.

John Cherwa reported in a story printed in “The Los Angeles Times” that owner Rick Dawson issued a press release on Thursday announcing the news.

“Our original plan for Rich Strike was contingent on the Kentucky Derby, should we not run in the Derby we would point toward the Preakness, should we run in the Derby, subject to the race outcome and the condition of our horse, we would give him more recovery time and rest and run in the Belmont, or another race and stay on course to run in five or six weeks rest between races,” Dawson said.

“Obviously, with our tremendous effort and win in the Derby it’s very, very tempting to alter our course and run in the Preakness at Pimlico, which would be a great honor for all our group, however, after much discussion and consideration with my trainer, Eric Reed and a few others, we are going to stay with our plan of what’s best for Ritchie is what’s best for our group, and pass on running in the Preakness, and point toward the Belmont in approximately five weeks.”

Despite winning the Kentucky Derby — at odds of 80-1 — Rich Strike was not expected to be the Morning Line favorite for the Preakness Stakes. That honor is likely to go to Kentucky Derby runner-up, Epicenter, or the filly, Secret Oath, who won the Kentucky Oaks for Hall of Fame trainer D. Wayne Lukas.

The last time a Kentucky Derby winner was held out of the Preakness was in 2019, when Country House was moved up following an in-race disqualification. That Derby winner never raced again for trainer Bill Mott.

Before then, the previous Derby winner not to ship to Baltimore for the Preakness was in 1996 when Grindstone was the “Run for the Roses,” but was later determined to have chipped bone in his knee.

Rich Strike will become only the 6th Derby winner to miss the Preakness in nearly 6 decades.