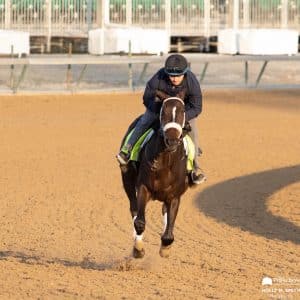 From the Pimlico Media Team:

Un Ojo will not enter in the Preakness Stakes (G1) after the foot bruise that kept the one-eyed gelding out of the Kentucky Derby flared back up.

“This morning his foot was a little warm again,” Louisiana-based trainer Ricky Courville said Monday morning by phone. “The vets went over him, and he’s not 100 percent. I’m dealing with the same thing. I guess the work kind of re-aggravated it.”

As with the Kentucky Derby, Un Ojo was withdrawn from the Preakness on the morning of entries. The New York-bred gelding, who won Oaklawn Park’s Rebel Stakes at 75-1 odds, had a five-eighths mile work Saturday at Churchill Downs and seemed to come out of that training move in good order.

“He looked really good (Sunday) morning, and in the afternoon they went and checked him out. He was a tad off, the foot was a little warm,” said Courville, whose son, Clay, has been overseeing Un Ojo in Kentucky. “This morning it was the same.”