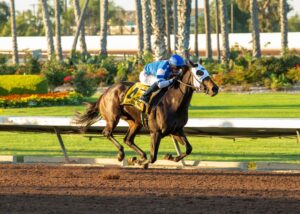 In one of the most competitive races on a 10-race California Cup Day program, veteran trainer Eddie Truman’s Professors’ Pride will try to transfer her scintillating dirt form to turf as she heads a field of 12 sophomore fillies bred or sired in California in Saturday’s $200,000 Leigh Ann Howard California Cup Oaks at a flat mile.

Proven at one mile on turf, Vivacious Vanessa rates a huge chance as well for trainer Gary Mandella as she transitions back to the grass following a disappointing effort sprinting on the main track.

With John Velazquez taking over, John Sadler’s Big Novel, a consistent performer on dirt, will try turf for the first time in what will be her sixth career start.

A first-out Cal Bred maiden special winner going six furlongs on Nov. 14 at Del Mar, Professors’ Pride, who is owned by longtime Truman client Academic Farms, then stretched out to run her competition off their feet going a flat mile in the statebred Soviet Problem Stakes at Los Alamitos on Dec. 10.  Off as the 9-5 favorite, the daughter of 2014 Breeders’ Cup Classic winner Bayern toyed with her competition and defeated Big Novel, who she’ll face again on Saturday, by three lengths.

Bred in California by Glen Hill Farm, Professors’ Pride, unbeaten in two starts, is out of the Twirling Candy mare Last Resort and has banked $102,000.

A first-out winner from far off the pace versus statebreds in a one mile turf maiden special here on Oct. 16, Vivacious Vanessa came back to run a better than looked third, beaten 9 ¼ lengths, in the seven furlong (dirt) Golden State Juvenile Fillies Nov. 5 at Del Mar.  Hemmed in around the far turn, she finished well under Juan Hernandez, who will ride her back on Saturday.

A California-bred daughter of Not This Time, out of the Mizzen Mast mare Masterful Lass, Vivacious Vanessa, who sold for $95,000 as a yearling, is owned by Thomas Nichols.  She need only run back to her maiden win to be a serious contender in the Oaks.

By hot sire Mr. Big, Big Novel is owned by her breeder, George Krikorian.  A six furlong winner versus statebreds in her third start on Oct. 2, she was second, beaten three lengths by Professors’ Pride in the one mile Soviet Problem Stakes Dec. 10 at Los Alamitos and will be ridden for the fifth consecutive time by Joe Bravo.

Never off the board in five starts, with a win, three seconds and a third, Big Novel will likely stalk the early pace in her first turf assignment.  Out of the Heatseeker mare Steamy Novel, Big Novel has earnings of $115,850.