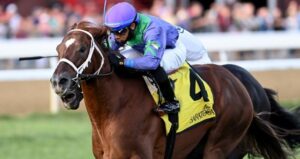 Marc Keller’s Pulsate will stretch out in distance while taking on a loaded field for Friday’s inaugural $100,000 Oyster Bay for 3-year-olds and upward going seven furlongs over the Widener turf at Belmont Park.

Trained by Bobby Ribaudo, the 5-year-old Speightstown chestnut arrives of a runner-up effort in the Grade 3 Belmont Turf Sprint Invitational on October 2, where he displayed stalking tactics and finished a length behind pacesetter Arrest Me Red.

The Oyster Bay will be a third overall start going seven furlongs on grass for Pulsate, who made his stakes debut with a close second in the seven-furlong Paradise Creek in May 2019.

Pulsate has consistently raced at the beginning of each month since finishing a close second in his seasonal debut going six furlongs over the inner turf in July at Belmont.

“Last time, there wasn’t much pace and Wesley’s [Ward] horse went wire-to-wire. He thinks highly of that horse, so it wasn’t a bad race,” Ribaudo said. “My only question here is, he’s run twice at Saratoga and the races are coming close together. But he seems to be doing well.”

Ribaudo added that the Oyster Bay could be a springboard to the $150,000 Aqueduct Turf Sprint Championship on November 27 at the Big A.

“You never know if the weather will cooperate during that time of year. We’ll take this one first and if the weather holds up, we’ll run in the Aqueduct Turf Sprint,” Ribaudo said.

Pulsate boasts a consistent 18-4-5-2 record with his first two victories taking place on dirt in early 2019 at Aqueduct. Ribaudo said a 6-year-old campaign is in play.

“He had been knocking on the door ever since he was a 3-year-old, so it’s always nice to get a stakes win,” Ribaudo said. “He’s doing so well as a colt, and he’s not difficult to handle at all, so I’d like to bring him back next year.”

Manny Franco has piloted Pulsate in 10-of-18 starts and will return to the irons from post 5.

Chad Brown will saddle a trio of contenders in Value Proposition, Flavius and Emaraaty.

Klaravich Stables’ Value Proposition, a 5-year-old Dansili ridgling, scored at stakes level for the first time with a last-out triumph in the Red Bank on September 4 at Monmouth Park. The consistent five-time winner has finished in the money in all five starts this season, including a late-closing second in the Grade 3 Forbidden Apple on July 14 at Saratoga.

Value Proposition will be ridden by Luis Saez from post 11.

Juddmonte’s Flavius will attempt to make amends following a fifth as the beaten favorite in the Grade 3 Mint Million in September at Kentucky Downs. Two starts back, the son of War Front was a wire-to-wire winner of the restricted Lure on August 7 at Saratoga.

Hall of Famer John Velazquez will ride from post 6.

Emaraaty will seek two consecutive victories, arriving off a 1 ½-length optional claiming score on September 3 at Saratoga over next-out winner Voodoo Zip. The 6-year-old son of Dubawi, out of Group 1-winner Zee Zee Top, won his last effort emerging off a five-month layoff.

Leaving from post 4, Emaraaty will be piloted by Hall of Famer Javier Castellano.

Trainer John Terranova will saddle Gatsas Stables’ Backtohisroots, who seeks his first stakes triumph since capturing an off-the-turf edition of the Atlantic Beach in 2018 at Aqueduct. The dark bay or brown son of Mark Valeski was a close second to Pulsate in the Lucky Coin off an 11-month hiatus ahead of a fourth in the Grade 3 Belmont Turf Sprint last out.

Wendell Fong and Lil Commissioner are entered for the main track only.