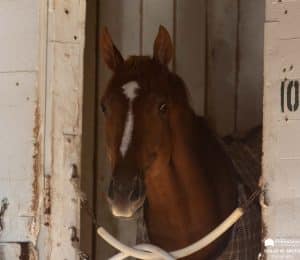 Rich Strike is on the cusp of history as he will attempt to become only the 15th Kentucky Derby winner in the last 148 years to be victorious in the $750,000 Clark presented by Norton Healthcare (Grade I).

“Richie,” as he’s called by his owner Rick Dawson of RED TR Racing and trainer Eric Reed, is the first Derby winner to attempt the Clark since Silver Charm won the 1998 edition. In the last century it’s been extremely rare to even have a Derby winner attempt to run in the Clark, especially in their 3-year-old season.

In 1970, Dust Commander returned to Churchill Downs for the Clark but only managed to finish third behind Watch Fob and Spud.

It’s been since 1901 when His Eminence won both the Kentucky Derby and the Clark as a 3-year-old.

“It might even be another good omen that it’s been a long time since someone has pulled this off, especially with what happened in the Derby being the second-longest price to ever win,” Reed said.

Rich Strike was tabbed as the 2-1 morning line favorite in the Clark where he’ll make his start this month following a troubled fourth-place finish in the $6 million Breeders’ Cup Classic (GI).

“If you were to ask me three months ago if I would’ve ever considered running in both races I likely would’ve said no,” Reed said. “Richie loves to train and the way he bounced out of that Classic showed us that he’s ready to run again.”

Wagering is available for the Clark on www.TwinSpires.com, the official wagering provider of Churchill Downs Incorporated and the Kentucky Derby.

The Commonwealth Turf, run at 1 1/16 miles on grass, will go as Race 11 of 12 with a post time of 5:56 p.m. (all times Eastern). Sunday’s Fall Meet final program will get underway at 1 p.m. and feature mandatory payouts in all wagers including the 20-cent Derby City 6 Jackpot.

Trained by Chad Brown, the improving Running Bee cruised to a maiden-breaking score Aug. 10 at Saratoga when he circled past eight rivals to win by 3 ¾ lengths under jockey Manny Franco. Following an unsuccessful try at Kentucky Downs in the $750,000 Dueling Grounds Derby (GIII), the son of English Channel returned to allowance company at Keeneland where he easily defeated nine rivals in a front-running score under jockey Tyler Gaffalione and earned a professional 91 Brisnet Speed Rating. Gaffalione will once again have the call from post No. 3.

Running Bee was one of two horses supplemented for $3,000 each by Brown in the Commonwealth Turf. His stablemate, Klaravich Stable’s Portfolio Company, was the runner-up finisher in last year’s $150,000 With Anticipation (GIII) and $200,000 Pilgrim (GII). The son of Kitten’s Joy will be ridden by Florent Geroux from post 9.

Three Diamonds Farm and Deuce Greathouse’s $500,000 American Turf (GII) winner Stolen Basewill make his return to Churchill Downs in the Commonwealth Turf. Trained by Mike Maker, Stolen Base has not found the winner’s circle since his triumph on Kentucky Derby Day in the American Turf. That day, the 3-year-old son of Bodemeister rallied from just off the pace to defeat nine rivals in the 1 1/16-mile event. Following his breakthrough victory, Stolen Base was well beaten in the $1 million Belmont Derby (GI), $200,000 Hall of Fame (GII) and $300,000 Bryan Station. As a 2-year-old, Stolen Base’s résumé includes runner-up efforts in the $200,000 Bourbon (GII) and $125,000 John Battaglia Memorial. Jockey Luis Saez will have the call from the rail.

Another graded stakes winner that entered the Commonwealth Turf is Donegal Racing’s Hall of Fame winner Ready to Purrform. Campaigned by Brad Cox, Ready to Purrform scored a wire-to-wire win in the Aug. 5 Hall of Fame at Saratoga. The son of Kitten’s Joy is 3-for-8 lifetime with one second and one third-place effort with purse earnings of $274,350. Ready to Purrform was well backed at odds of 9-2 in the Bryan Station but finished 10th, beaten 4 ¼ lengths. Jockey Ricardo Santana Jr. has the call from post 6.

The Commonwealth Turf is scheduled to be contested in Lane 1 of the turf course.

Wagering is available for the Commonwealth Turf and every race from Churchill Downs onwww.TwinSpires.com, the official wagering provider of the Kentucky Derby and Churchill Downs Incorporated.

The Kentucky Jockey Club, run at 1 1/16 miles, will award the Top 5 finishers points on a 10-4-3-2-1 scale towards a spot in the starting gate for the $3 million Kentucky Derby presented by Woodford Reserve (GI).

Trained by Brad Cox, Instant Coffee was a determined three-quarters of a length victor in his debut. The son of Bolt d’Oro returned in the $600,000 Breeders’ Futurity (GI) where he finished fourth behind eventual $2 million Breeders’ Cup Juvenile (GI) winner Forte.

“We’re looking forward to him in this spot,” Cox said. “The Breeders’ Futurity came up a key race with Forte coming back to win the Juvenile. He had a pretty tough trip in the Breeders’ Futurity and I think that experience can benefit him by maturing off of that start.”

Wagering is available for the Stars of Tomorrow II program on www.twinspires.com, the official wagering provider of Churchill Downs Incorporated and the Kentucky Derby.

KENTUCKY DERBY FUTURE WAGER POOL 2 OPENS THURSDAY – Fans will have their second of six opportunities to bet on the 149th running of the Kentucky Derby presented by Woodford Reserve (Grade I) Thursday-Sunday where Repole Stable and St. Elias Stable’s Breeders’ Cup Juvenile (GI) winnerForte was made the 10-1 individual betting favorite while the pari-mutuel field of “All Other Colts and Geldings” from the 2020 foal crop not listed within the 38 individual betting interests was tabbed as the heavy 3-5 choice.

The four-day pool, which features $2 Win and Exacta wagering, will open Thursday at noon (all times Eastern) and close Sunday at 6 p.m. Pool 2 will run concurrent with the lone Kentucky Derby Sire Future Wager, where fans can bet horses sired by 39 individual sires and an option for “All Others” that were not listed. Horses from the 2020 foal crop sired by Uncle Mo are the 4-1 morning line favorite followed by Violence (6-1), Arrogate (8-1) and Into Mischief (8-1). All Other Sires is listed at 6-1.

In the Kentucky Derby Future Wager, Forte, trained by Hall of Famer Todd Pletcher, has won four of five career starts and is a three-time Grade I winner with his other victories coming in the Breeders’ Futurity and the Hopeful (GI). The talented son of Violence has already banked $1,595,150 and is the heavy favorite to become champion 2-year-old.

Wagering will be suspended on #17 Frank’s Honor because of an injury, according to trainer Kenny McPeek.

As was the case last year, Pool 2 will assume that horses under the care of trainers suspended from competing in the 2023 Kentucky Derby will not be under consideration. Instead, they are included within the pari-mutuel field.

Fans will have the opportunity to see some of the Kentucky Derby Future Wager Pool 2 entrants run Saturday at Churchill Downs for Stars of Tomorrow II which features exclusively 2-year-old races. The featured event is the $400,000 Kentucky Jockey Club (GII), worth 10 points to the winning horse on the Road to the Kentucky Derby.

More information, Brisnet.com past performances and real-time odds on the Kentucky Derby Future Wager will be available before the pool opens Thursday online at https://www.kentuckyderby.com/wager/future-wager.

DOWN THE STRETCH – Racing continued Thursday at Churchill Downs with a special first post of 11:30 a.m. The Derby City 6 Jackpot was hit Wednesday for $67,880.20. There will be a mandatory payout Sunday for Closing Day. … Santa Claus and Mrs. Claus will be visiting guests at Churchill Downs Friday-Saturday. It’s also been reported that Santa loves to place a bet on www.TwinSpires.com.