Road to KY Derby 2023 Starts on Saturday — At Churchill Downs

Road to KY Derby 2023 Starts on Saturday — At Churchill Downs 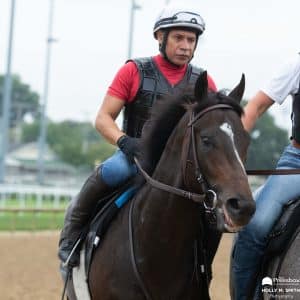 The Road to the Kentucky Derby presented by Woodford Reserve will begin Saturday at Churchill Downs where eight 2-year-olds, including impressive maiden winner Echo Again, were entered to face undefeated Grade II winner Damon’s Mound in the 41st running of the $300,000 Iroquois (Grade III).

The Road to the Kentucky Derby, a series of select races that award a sliding scale of points to the top finishing positions, has determined preference for its 20-horse Kentucky Derby presented by Woodford Reserve (Grade I) field since 2013. The 1 ¼-mile classic for 3-year-old Thoroughbreds will be run at the historic Louisville, Ky. racetrack for the 149th consecutive year on Saturday, May 6, 2023.

Cliff and Michele Love’s homebred Damon’s Mound, the headliner in the Iroquois, is trainer Michelle Lovell’s first starter in a Road to the Kentucky Derby qualifying race. The Florida-bred son of Girvin dominated in his debut at Churchill Downs on July 2 where he demolished a field of 10 rivals by 12 ½ lengths. In his second start, Lovell shipped the homebred to Saratoga where he defeated a compact field of four in the Saratoga Special (GII) by 3 ¼ lengths.

“He’s done everything right since we got him into our barn this spring,” Lovell said. “He has the mind of an older horse and that’s what makes him so special. The Loves have been in this game for a very long time and it’s very rewarding they are able to have a horse like him, especially being a homebred. The two-turns in the Iroquois is obviously a test but he’s passed his others we’ve given him with flying colors. I think this is the next progression to take.”

Damon’s Mound has done the majority of his training this summer at Colonial Downs but shipped back to his home base of Churchill Downs on Tuesday to continue preparing for the Iroquois. Jockey Gabriel Saezwill have the return mount from post No. 3.

The top rival to Damon’s Mound in the Iroquois is Winchell Thoroughbreds highly-touted Saratoga maiden special weight winner Echo Again. The son of former Horse of the Year Gun Runner cruised to a 6 ¾-length debut score on Aug. 20 under jockey Ricardo Santana Jr., who was filling in for regular pilot Joel Rosario.

“We’re extremely excited about who this horse is,” Hall of Fame trainer Steve Asmussen said. “It’s a family affair. He came from mom and dad’s farm in Laredo, Texas. He was my son Erik’s favorite horse all winter and Keith’s favorite all summer. He gets on him regularly. It was a very meaningful victory.”

Rosario will be back aboard Echo Again and break from post 9.

Another 2-year-old with potential star power that was entered in the Iroquois is West Point Thoroughbreds and Albaugh Family Stables’ Jace’s Road. The son of Quality Road was a first-out winner on Aug. 6 at Ellis Park under jockey Joe Talamo. Trained by Brad Cox, Jace’s Road was a $510,000 Keeneland September Yearling Sale purchase in 2021. Horses campaigned by Dennis Albaugh’s Albaugh Family Stables have won three runnings of the Iroquois: Not This Time (2016), Dennis’ Moment (2019) and Sittin On Go(2020). Jace’s Road will be ridden by Florent Geroux from post 6. 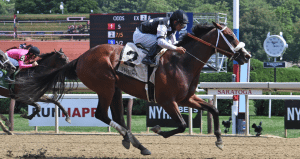 The 1 1/16 mile Pocahontas kicks off the 2022-23 Road to the Kentucky Oaks. The Pocahontas was carded as the 11th race finale with a post time of 5:58 p.m. Saturday’s program also will feature the $300,000 Iroquois (GIII), the Pocahontas’ male counterpart which kicks off the Road to the Kentucky Derby presented by Woodford Reserve. Along with the duo of 2-year-old stakes events, the program includes the $400,000 Locust Grove (GIII), $300,000 Open Mind (Listed) and $275,000 Louisville Thoroughbred Society.

Trained by Hall of Famer D. Wayne Lukas, Naughty Gal broke her maiden at second asking on July 4 at Churchill Downs by 9 ¼ lengths. One month later the daughter of leading stallion Into Mischief became a graded stakes winner when she led every step of the way in the 6 ½-furlong Adirondack. Just two weeks ago, Naughty Gal tested Grade I competition in the $300,000 Spinaway (GI) but faded to ninth. She’ll be ridden in the Pocahontas by Mitchell Murrill from post No. 3.

Justa Warrior, the daughter of Triple Crown winner Justify, is undefeated from two starts for Ellis Park leading trainer John Ortiz. In her debut, Justa Warrior drew away from a field of nine by five lengths under jockey Rey Gutierrez. Four weeks later, Justa Warrior was victorious by one-length in the Ellis Park Debutant as the 5-2 post time favorite. Gutierrez will be back aboard Justa Warrior in the Pocahontas and break from post 11. 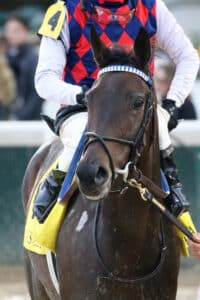 Trained by Kenny McPeek, Envoutante finished third in last year’s Locust Grove behind former Longines Kentucky Oaks (GI) winner Shedaresthedevil. Envoutante has recorded four of her six lifetime victories beneath the Twin Spires and most notably has won the last two runnings of the Falls City (GII) in the Fall Meet. Brian Hernandez Jr. will have the mount from post No. 2

Another top entrant in the Locust Grove is multiple stakes winner Li’l Tootsie. The 4-year-old daughter of Tapiture recently won the $125,000 Groupie Doll for owner Joel Politi and trainer Tom Amoss. Li’l Tootsie has seven lifetime victories from 17 starts with $532,874 in earnings. Li’l Tootsie will be ridden byEdgar Morales from post 4. 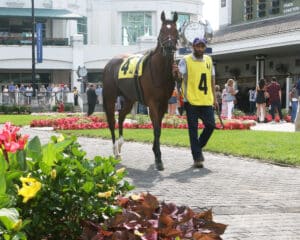 BELL’S THE ONE FACES DEFENDING CHAMPION SCONSIN IN $300,000 OPEN MIND

Over the last 18 months, racing fans have enjoyed the rivalry of Bell’s the One and Sconsin and will be treated to their eighth clash against one another in Saturday’s $300,000 Open Mind (Listed) at Churchill Downs.

Four weeks ago, Bell’s the One and Sconsin met for the seventh time and dueled in the $200,000 Lady Tak. Bell’s the One got the better of her rival and scored a 1 ½-length victory. Owned by Lothenbach Stablesand trained by Neil Pessin, Bell’s the One is 8-for-9 lifetime when she competes at six furlongs. Bell’s the One has also run some of her best races beneath the Twin Spires. The 6-year-old daughter of Majesticperfection has won five of 11 starts at Churchill Downs with three seconds and one third. In last year’s Open Mind, Bell’s the One closed ground late but could not get by Sconsin, who scored a three-quarters of a length victory. Regular rider Corey Lanerie will once again be in the saddle in the Open Mind and the duo will break from post No. 4.

Lloyd Madison Farms’ Sconsin finished a disappointing fourth in the Lady Tak as the 4-5 favorite. Trained by Greg Foley, Sconsin has five wins from 10 lifetime starts at Churchill Downs and three wins from five starts at the six-furlong distance. Jockey Tyler Gaffalione will be back aboard Sconsin and break from the rail.

Through 12 runnings of the Open Mind there have been no repeat winners of the race. Sconsin set the stakes record in last year’s running when she scorched six furlongs in 1:08.75.