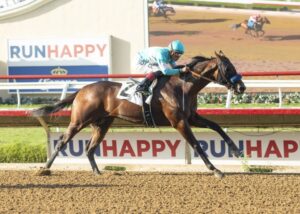 A $750,000 Keeneland September yearling, Rockefeller was a most impressive first-out winner going six furlongs at Del Mar on Aug. 28, winning by 2 ¼ lengths under Abel Cedillo, who rides him back on Friday.  A bay colt by Medaglia d’Oro out of the Speightstown mare Dance to Bristol, Rockefeller is owned by SF Racing, LLC, Starlight Racing, Madaket Stables, LLC, et al.  A winner of a record five previous runnings, Baffert would appear to be well positioned to notch his sixth American Pharoah win.

Another talented first-out winner, Forbidden Kingdom, rates a big shot in the American Pharoah as well.  Trained by Richard Mandella, this chestnut colt by American Pharoah out of the Five Star Day mare Just Louise, broke sharply and took control early on his way to a half length score going 5 ½ furlongs on Aug. 21 at Del Mar.  Purchased for $300,000 out of the 2020 Fasig-Tipton Selected Yearlings Showcase, Forbidden Kingdom is owned by Spendthrift Farm and MyRacehorse and will be ridden back by Juan Hernandez.

Pappacap, a winner of the Grade II Best Pal Stakes in his second start and Finneus, who finished fourth and second respectively in the Grade I Del Mar Futurity at seven furlongs Sept. 6, both merit strong consideration.  California-bred Joker Boy, the likely speed in the race, comes off a smashing 3 ½ length score in the statebred I’m Smokin Stakes at six furlongs and will have theft on his mind with Edwin Maldonado up.

First post time for a nine-race program on Friday is at 1 p.m.  For additional information, please visit Santaanita.com or call (626) 574-RACE.