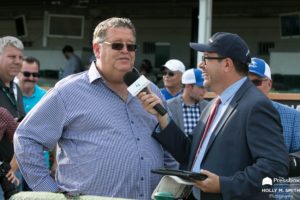 Albaugh Family Stables’ Howling Time, a 2-year-old son of Not This Time, broke his maiden on Sept. 25 at Churchill Downs by 1 ½ lengths in a six-furlong maiden special weight contest. The $200,000 purchase from the 2020 Keeneland September Yearling Sale stopped the teletimer in 1:10.15 to earn a stout 91 Brisnet Speed Rating. Howling Time will be ridden by Joe Talamo from post position No. 6.

Meanwhile, his stablemate, Jim Bakke and Gerald Isbister’s Red Knobs, was only defeated by one-length in the $300,000 Iroquois to Major General and Tough to Tame. The chestnut son of Union Rags broke his maiden this summer at Ellis Park by an impressive 6 ¼ lengths. He’ll be ridden by James Graham from post 9.

After Sunday’s opener, live racing will be conducted on a Wednesday-Sunday schedule with dark days on Mondays and Tuesdays. Most race days feature 10 live races. There will be 11 on Sunday’s opener plus a trio of Saturdays: Nov. 6, 13 and 20. Twelve-race cards are scheduled over the final four days, Nov. 25-28.

There will be an early 11:30 a.m. start (gates 10 a.m.) on Thanksgiving Day (Thursday, Nov. 25) – a Louisville tradition at Churchill Downs since 1969 where more than 7,000 turkey dinners are served with all the trimmings, making it the largest number anywhere in the region.

Racing fans are encouraged to wager on racing from Churchill Downs via TwinSpires.com, the official advance-deposit wagering service for Churchill Downs Incorporated and its family of racetracks.

Sandstone, a daughter of Street Sense, broke her maiden on Oct. 3 at Churchill Downs over a “sloppy” surface. The Kenny McPeek-trained filly covered the one-mile distance in 1:37.43 and earned a 90 Brisnet Speed Rating.

Two weeks prior to Sandstone’s open-length maiden score, the Rodolphe Brisset-trained Yuugiri cruised to a decisive victory. The homebred-daughter of Shackleford completed the six-furlong maiden special weight contest in 1:09.55 and earned a 95 Brisnet Speed Rating.

Brian Hernandez Jr. will have the return mount on Sandstone from post No. 3 while September Meet leading rider Tyler Gaffalione will pilot Yuugiri from post 4.