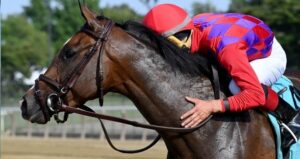 Trained by Jorge Abreu, the bay daughter of Flintshire enters off a closing second in the Grade 2 Sands Point on October 16 at Belmont Park, where she made up nearly six lengths from the first point of call to miss by a neck to Fluffy Socks.

Runaway Rumour captured her first three lifetime starts, all at Belmont Park. Following a triumph in a state-bred maiden going six furlongs over Belmont’s inner turf in May, she defeated New York-bred winners going one mile on the Widener turf five weeks later. She made her stakes debut a winning one, when besting open company in the Wild Applause on June 26 at Belmont.

Abreu said he is hoping for firm footing for Sunday’s race.

“I’m more concerned about the weather than anything else. We’re supposed to get some rain,” Abreu said. “The horse is doing great though. She came out of her last race in really good shape and had a nice breeze at Belmont the other day. She doesn’t need much done with her, she’s a small horse.”

Runaway Rumour is out of the multiple stakes-placed Elusive Quality mare Elusive Rumour, who produced stakes-winner Myhartblongstodady who also is trained by Abreu.

Jose Lezcano returns to the irons aboard Runaway Rumour from post 11.

Trainer Graham Motion will be represented by a trio of fillies, including Michael Ryan, Jeff Drown and Team Hanley’s Invincible Gal who arrives off a close fourth in the Glen Cove on October 15 at Belmont.

The five-time stakes-placed daughter of Invincible Spirit returns to Aqueduct for the first time since finishing a late-closing second in the Tepin in November 2020. She built on a productive juvenile campaign when picking up second-place finishes in the Grade 3 Soaring Softly on May 15 at Belmont Park and the Virginia Oaks two starts back on August 31 at Colonial Downs.

“She’s obviously a very hard-knocking horse,” Motion said. “I’m a little torn with her. I’m almost leaning toward thinking she wants to go short, but she ran so well in the Virginia Oaks going a mile and an eighth.”

Invincible Gal will be piloted by Hall of Famer John Velazquez from post 10.

Earle I. Mack’s Batyah will attempt to shake off 13 months’ worth of rust when making her first start since finishing fifth in the Grade 2 Jessamine in October 2020 at Keeneland. The dark bay or brown daughter of Pioneerof the Nile displayed a devastating late kick on debut last September at Belmont, rallying from ten lengths off the pace in ninth to win by 2 ¼ lengths over the Widener turf.

“She’s been ready to run for a while,” Motion said. “I entered her a few times and got a little unlucky with the weather and races coming off the grass, but from a fitness point she should be ready.”

Hall of Famer Javier Castellano has the call from post 5.

Rounding out Motion’s contingent is Fortune Racing’s Bipartisanship who makes her North American stakes debut off a sharp maiden triumph over the Laurel Park turf on October 10. Following a third-place finish at Belmont in her first stateside start, the Bated Breath chestnut made up 13 lengths last out to win at sixth asking by 3 ¾ lengths.

“The first time I ran her at Belmont she just walked out of the gate but ran respectfully. I took her to Laurel and she won very comfortably that day,” Motion said. “I thought the effort warranted a try against stakes company. It’s one of the last chances to run against straight 3-year-olds. She acts like she can be pretty useful.”

Gainesway Stable homebred White Frost will make her first start since January 30 when she captured the Grade 3 Sweetest Chant at Gulfstream Park over next out winners Con Lima and Domain Expertise.

The dark bay daughter of Candy Ride, out of stakes-winner Miss Frost, returns to the Big A for Hall of Fame trainer Bill Mott after breaking her maiden over the inner turf last November.

Breaking from post 6, White Frost will be ridden by Junior Alvarado.

The First Samurai chestnut captured Grade 2 Miss Grillo in her most recent victory. Despite being winless in six starts this season, Plum Ali garnered black type twice this year when finishing third in the Grade 2 Appalachian on April 3 at Keeneland and second in the Grade 3 Wonder Again on June 3 at Belmont Park. She arrives off a fifth beaten 1 ¾ lengths in the Grade 2 Sands Point.

The Winter Memories honors Phillips Racing Partnership’s turf distaffer, who captured the Grade 1 Garden City Handicap in 2011 and the Grade 1 Diana the following year. The Jimmy Toner trained daughter of El Prado, out of fellow Grade 1-winning millionaire Memories of Silver, won seven graded stakes throughout her career and boasts earnings in excess of $1.2 million.

The Winter Memories is carded as Race 8 on Aqueduct’s nine-race program. First post is 12:20 p.m.